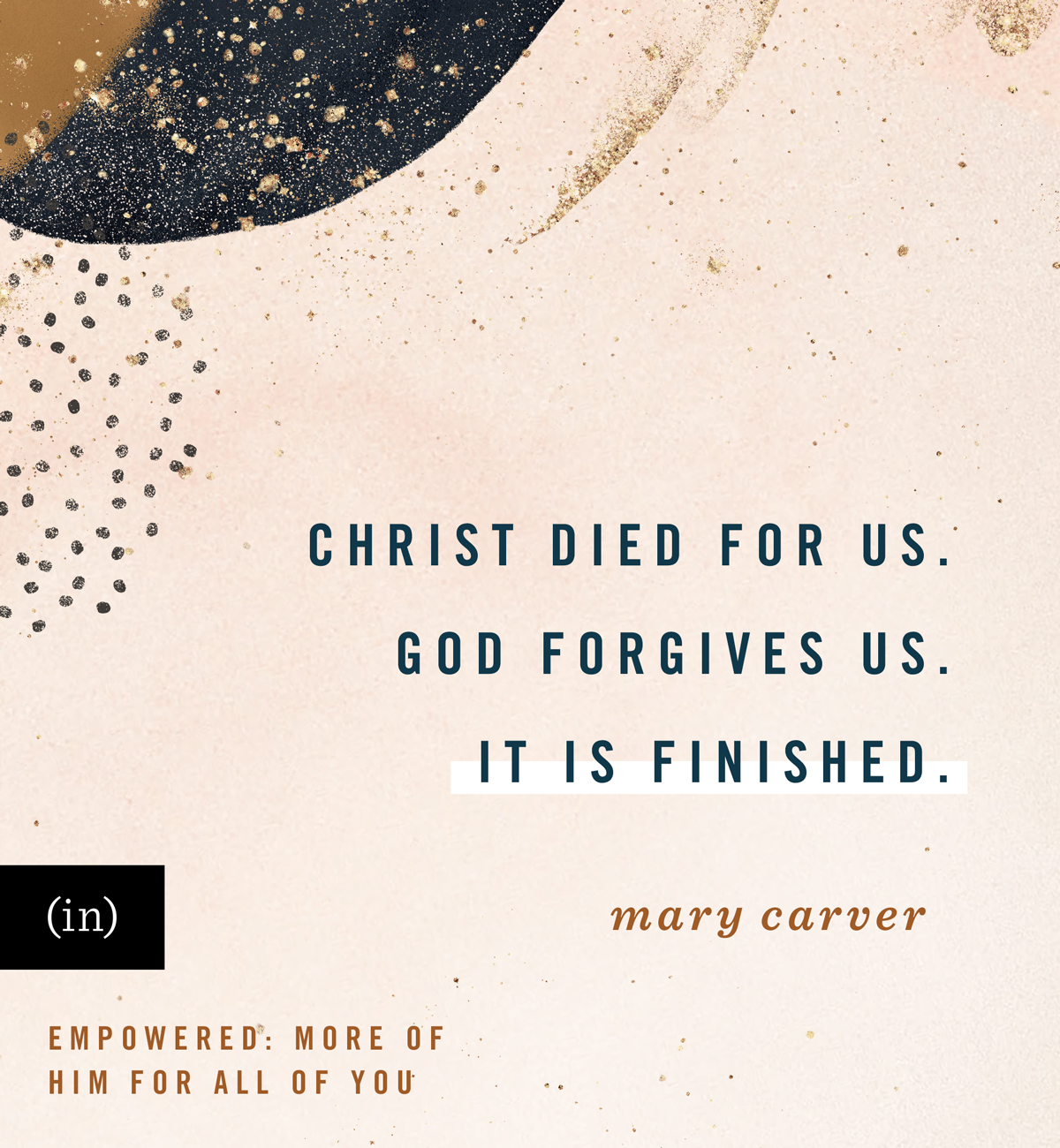 For his unfailing love toward those who fear him is as great as the height of the heavens above the earth. He has removed our sins as far from us as the east is from the west. The Lord is like a father to his children, tender and compassionate to those who fear him.
Psalm 103:11–13 (NLT)

The day I realized my children could empty the dishwasher was a game changer for me. This almost-daily chore was the bane of my existence, and, much like a child myself, I always put it off in favor of doing anything else. But now my girls could be responsible for putting away our clean dishes while I made dinner or finished up a work project, and it felt like a domestic miracle.

Of course, handing off this chore to my kids meant that I’d occasionally find dishes in the wrong spot—or go for a day or two without being able to find a dish I needed at all! And then there was the inevitable accident, when my youngest dropped a bowl on the kitchen floor. In a split second the ice cream bowl I had painted for my husband at a long-ago paint-your-own-pottery night shattered beyond repair.

Startled at the noise, both our heads snapped up as we stared at each other. Her eyes bounced between my face and the ceramic pieces at her feet as she visibly began to panic. “Mommy! I’m so sorry! I’m sorry, Mommy! It slipped! I’m sorry! Ohhh, I’m sorry!”

“It’s okay,” I assured her. “What happened? Did something break? Are you okay?”

She told me that she’d dropped a bowl and that it was broken. I instructed her to stand still so she wouldn’t step on anything sharp. I told her that it was okay, that accidents happen. Then I walked into the kitchen to clean up the mess and realized which bowl had broken. When I saw that it was my one bowl that’s truly irreplaceable, I couldn’t hide my disappointment — which my daughter mistook as a sign that she was in trouble.

“I’m sorry . . .” The rush of apologies began once more, as she tripped over her own tongue, trying to make sure I knew how very sorry she felt. She told me again that it had slipped out of her hand, working so hard to convince me that she hadn’t broken the bowl on purpose, that she wasn’t being neglectful or irresponsible. And I told her again that it was okay, working hard to convince her that I wasn’t angry and that I knew these things just happen sometimes.

Round and round we went, her apologizing and me telling her it was okay, as I picked up shards of my pretty bowl and wrapped them up for the trash. For days she apologized and I forgave, nearly to the point of being annoying! As she finally accepted that she was forgiven (or simply forgot the incident), I realized that how she acted is how I often act when I’m the one who needs to apologize.

I do it to my friends and family when I’ve wronged them, whether it was intentional or as accidental as a little girl dropping a bowl on the kitchen floor. Over and over, I bring up my transgressions and express my deep remorse in an effort to assure them I recognize how badly I messed up.

I do this with the Lord too. As soon as I realize I’ve sinned against Him, I turn my eyes to His face — shocked, panicked, afraid of the consequences to come. I begin my apologies without taking more than a second or two to reflect on anything other than my regret (and my desire to avoid getting in trouble).

When I’m calm and reasonable, I know my heavenly Father reacts just like I did with my daughter and the broken bowl — compassionate, concerned for my well-being, and merciful. But in the moment I recognize my sin, I’m flooded with regret and fear and immediately begin working to earn His forgiveness.

But forgiveness doesn’t work that way. The Lord offers us mercy and pardons our sins not based on the vehemence of our apologies but because of the sacrifice Jesus made when He died for our sins. On the cross He said, “It is finished,” not, “Tell me again how sorry you are.”

Christ died for us. God forgives us. It is finished.

If you find yourself apologizing over and over, attempting to prove to God or to others just how remorseful you are, may I gently suggest you stop? Our heavenly Father has promised to remove our sin as far as the east is from the west. Believe in Him. Believe in His promise. And accept His forgiveness. Let it stay finished so you can live forgiven.

Heavenly Father, thank You for Your mercy. Thank You that I don’t have to beg for it but that You give it to me abundantly because of Christ. Forgive me for where I’ve gone wrong, and please help me trust Your forgiveness and rest in Your compassion toward me. In Jesus’s name, amen.

This article was written by Mary Carver, as published in Empowered: More of Him for All of You.

Empowered: More of Him for All of You, by Mary Carver, Grace P. Cho, and Anna E. Rendell is designed to incorporate the five major components of our being — physical, mental, emotional, relational, and spiritual. The sixty Scripture passages and devotions invite you to see from different angles how God empowers us, and each day ends with prayer and reflection questions to deepen the learning. Grab a copy now. We pray it blesses you.

Christ died for us. God forgives us. It is finished. @marycarver: