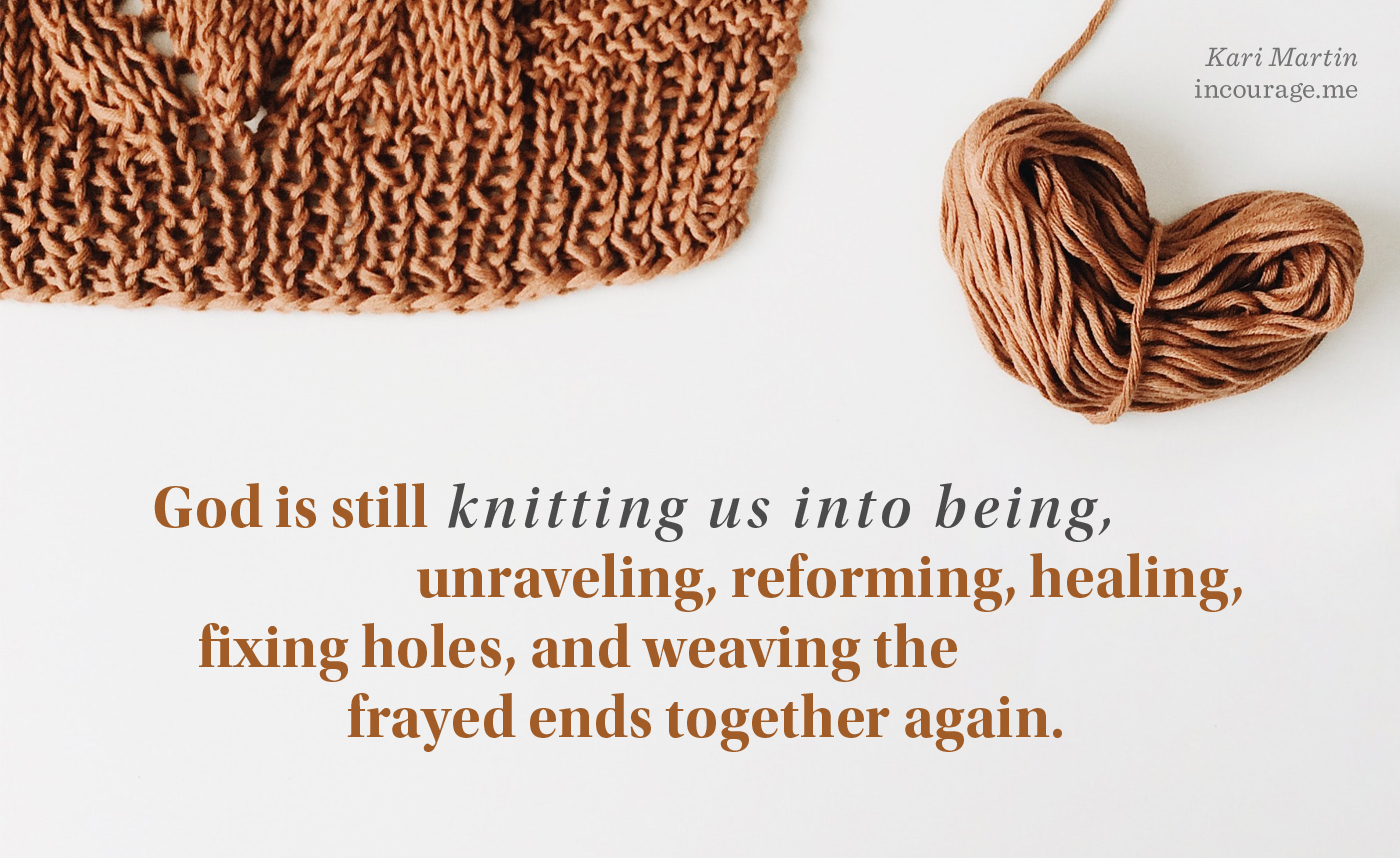 My grandma taught me to knit when I was eight years old at our annual family Christmas. Somewhere between dinner and dessert, my cousins and I crowded around her with shiny knitting needles too big for our hands and trained our eyes on her fingers. I clumsily made my way through one, two, three rows, but it wasn’t long before my finger snagged on a hole, right smack in the middle of my scarf-to-be. Despairing at the thought of starting again, I presented the problem to my grandma. With just a quiet “must’ve lost a stitch,” she unraveled my work up to the problem and restored the scarf to its former potential. Her movements were incongruously quick compared to my own and it looked like magic, this unraveling and restoring. To this day, the feeling of grace is accompanied by the sound of clacking knitting needles nestled in my grandma’s hands.

But sin? Sin feels like that stitch dropped unbeknownst to me, the kind that you don’t see until five rows later. Or perhaps, it is like a hole burned straight through the knitted meshwork that makes up you and me and us. All around the edges of that hole, where there used to be woven yarn are fraying loose ends. With every pull, every snag, the unraveling continues, and the hole grows bigger.

The deaths of George Floyd, Breonna Taylor, Ahmaud Arbery, and the countless other Black lives lost are some of the loose threads surrounding the smoky hole of systemic racism. Floyd’s words “I can’t breathe” overflowed into streets and toppled statues. The shouts of protests snaking through city streets have defiantly pulled on these threads and exposed the sin of racism more profoundly than ever.

This racism that has existed much too long — in me, maybe in you, in the church, in the very fabric of our society. The unraveling threads reveal how deeply woven racism is from one generation to the next.

I was raised in Richmond, Virginia, a city that has gained quite a standing in national news recently for the protests surrounding the Confederate statues on Monument Avenue. Every year for as long as I could remember, Richmond hosted the Monument Avenue 10k and when I was thirteen, I ran the race with my mom. There were bands lined up around the medians and thousands of people running alongside me. It was exhilarating and fun, and I did not think twice about the Robert E. Lee and Stonewall Jackson statues that stood as idols to white supremacy.

Just recently, I went back to Monument Ave and saw the very same statues I ran past at thirteen. They were covered in profanity, awaiting their removal. I saw them, and something began to unravel. The profanity that covered the statues became the outward manifestation of the desecration that existed all along. The innocence of my childhood experiences unraveled; a trust in my own righteousness unraveled.

The work of unraveling is similar to the work of confessing. It deals a striking blow to one’s own achievements. Just like the five, lumpy rows of knitting my grandma undid to fix my mistake, the economic, academic, and professional successes I’ve claimed come undone in this unraveling work that has begun in me. As a white woman, my environment, my family of origin, and my privilege have brought me far, lifting me up while also pushing others down, and now I cannot unsee the inequity and injustice.

If I am honest, though, I am scared that as I begin the journey to root out the sin of racism in me, to confess it and to act differently, I will discover that it runs deeper than I knew. (It probably does run deeper than I know.) I am scared my inexperienced fingers won’t know what to do with the pile of loose yarn on the ground, that I won’t know how to make anything better or that I’ll make the same mistakes again.

And then, I remember my grandma. I remember her deft knitting hands and I hear the sound of clicking and clacking grace. I remember that yarn is pulled through fingers for creation, not just desecration.

For it was you who formed my inward parts; you knit me together in my mother’s womb.
Psalm 139:13 (NRSV)

God is a knitter, too, just like my grandma. God knit us together when we were just beginning in our mothers’ womb, when all we felt was belonging. Better yet, God didn’t stop knitting — not when hurt came, not when sin tore through us. God did not make us stagnant, winding us up like a cheap toy to set us in motion. No, God is still knitting us into being, unraveling and knitting back, creating, reforming, healing, fixing holes, and weaving the frayed ends together again. As we root through privilege and systems of oppression in which we are complicit, God is still knitting. As we confess what we have done and what we have left undone, God is still knitting, row after row of becoming.

My friends, as we confess, as we act, listen, and change, may we cling desperately and courageously to our knitting God, who requires our unraveled lives for the work of justice and mercy.

As we root through privilege and systems of oppression in which we are complicit, God is undoing the threads of racism and recreating us. -@karisophia1: Click To Tweet Leave a Comment