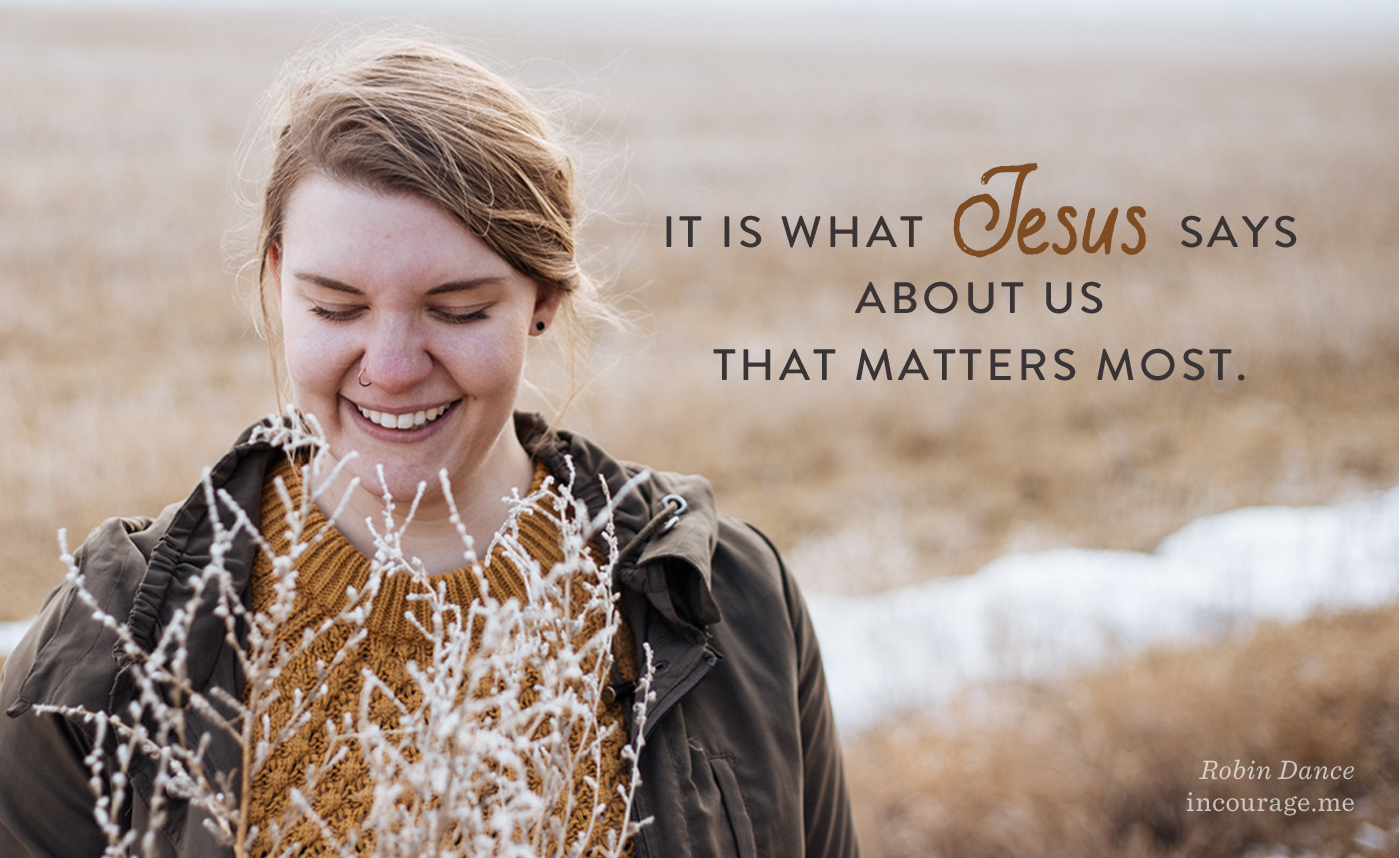 I never met my father’s father whose death preceded my birth, but family legend recounts him as saying, “Don’t believe anything you hear or read and only half of what you see.” In a culture where news and headlines are sometimes branded as fake, it’s hard to know what to believe, isn’t it? While I have no idea if Granddaddy Jake was being cynical or just funny (or even if this quote is true), I’ve found his advice to be helpful to remember.

Over the course of our lifetimes, we hear countless messages about ourselves. Some of them are positive and affirming and true; others can steal joy and wound our hearts when they’re completely false.

Magazine covers at the grocery store checkout broadcast a level of unattainable perfection in beauty and home. Social media can cultivate FOMO and comparison, creating feelings of inadequacy, irrelevancy, or marginalization.

But don’t the messages we hear from those closest to us do the most damage? Harsh or hurtful words coming from those we love and care about are personal. Their words seem credible because they’re rooted in relationship.

Has a co-worker, friend, or family member ever said something to you or about you that hurt so deeply you’ve never been able to forget it? I can’t imagine any of us reaching adulthood without carrying a few scars from the cruel or careless words of others.

From childhood, we’re told, “Sticks and stones may break your bones, but words will never hurt me,” and as much as we want to believe the age-old adage, it’s just not true.

Words matter, and they can hurt us.

Perhaps someone long ago told you you were worthless or stupid or would never amount to much. Maybe a friend put you down in front of others. Mean words can be delivered overtly to a child on the playground or more subtly in your home, like when your spouse finds fault with the way you spend money or time or even how you handle household chores. Harsh words may come from an impossible-to-please boss. What about a parent who always criticized your grades even when you were trying your best? Or remember that misunderstanding you had with a friend who took something you said the wrong way and replied with venom-tipped rage?

Years ago, I discovered a powerful and highly effective way to diffuse the impact of hateful or hurtful words. I realized that just because someone says something about me, it doesn’t mean it’s true. Different from my grandfather’s adage, it is not a categorical dismissal of everything we hear but a careful sifting of the words and messages that find their way past our ears and straight to our hearts.

Harmful and hurtful words are often spoken in anger by those who know us best. The latter could make what they say credible to a certain extent — a bit of truth mixed with a distortion of reality. Maybe the verbal assault is a result of something you did or said, and even if you were in the right or what you did was in the best interest of the other, the offended are indignant and come out swinging, telling you why you’re the one at fault (even when the situation isn’t even a matter of fault). When you’re being attacked, it’s easy to believe the accusations and assume fault because a fraction of what they say could be true.

But let’s say it again for the benefit of those who didn’t hear it the first time: Just because someone says something about you, it doesn’t mean it’s true.

And this goes for what you’re telling yourself, too, friend. Sometimes the most damaging verbal assaults are self-inflicted. We speak to ourselves harshly and unkindly in a way we’d never speak to another human. We see our own flaws and shortcomings. We know our darkest thoughts and secret sins and all the ways we fall short of living what we profess.

Just because we say something about ourselves, it doesn’t mean it’s true.

This is why it is critical for us to know the truth of God’s Word and what He says about us. Whatever God says about you and me is always true. What others tell us may not be the case.

Words matter, and they can heal us. There is power in God’s Word because it is living and active. It is in Scripture we learn the truth of our identity because it is what Jesus says about us that matters most.

Jesus lives in us and through our lives because we have been crucified with Him.

We are God’s masterpiece, and He has prepared good work for us.

We are created in the image of God. What a privilege, a responsibility, and a beautiful opportunity.

You and I are remarkable and wondrously made. In the economy of God, you always have value and immeasurable worth. Always.

We are daughters of a King with royal blood coursing in our veins. Lovies, we are princesses!

Sisters, enjoy the kind and beautiful words offered to you by way of encouragement from those who love you. Resist the temptation to believe the lies hurtful people and this world will fling at you, and always dwell in truth that is true, honorable, just, pure, lovely, commendable, morally excellent, and praiseworthy.

Because whatever God says about you is the only thing you can always believe.

You and I are remarkable and wondrously made. In the economy of God, you always have value and immeasurable worth. Always. -@robindance: Click To Tweet Leave a Comment