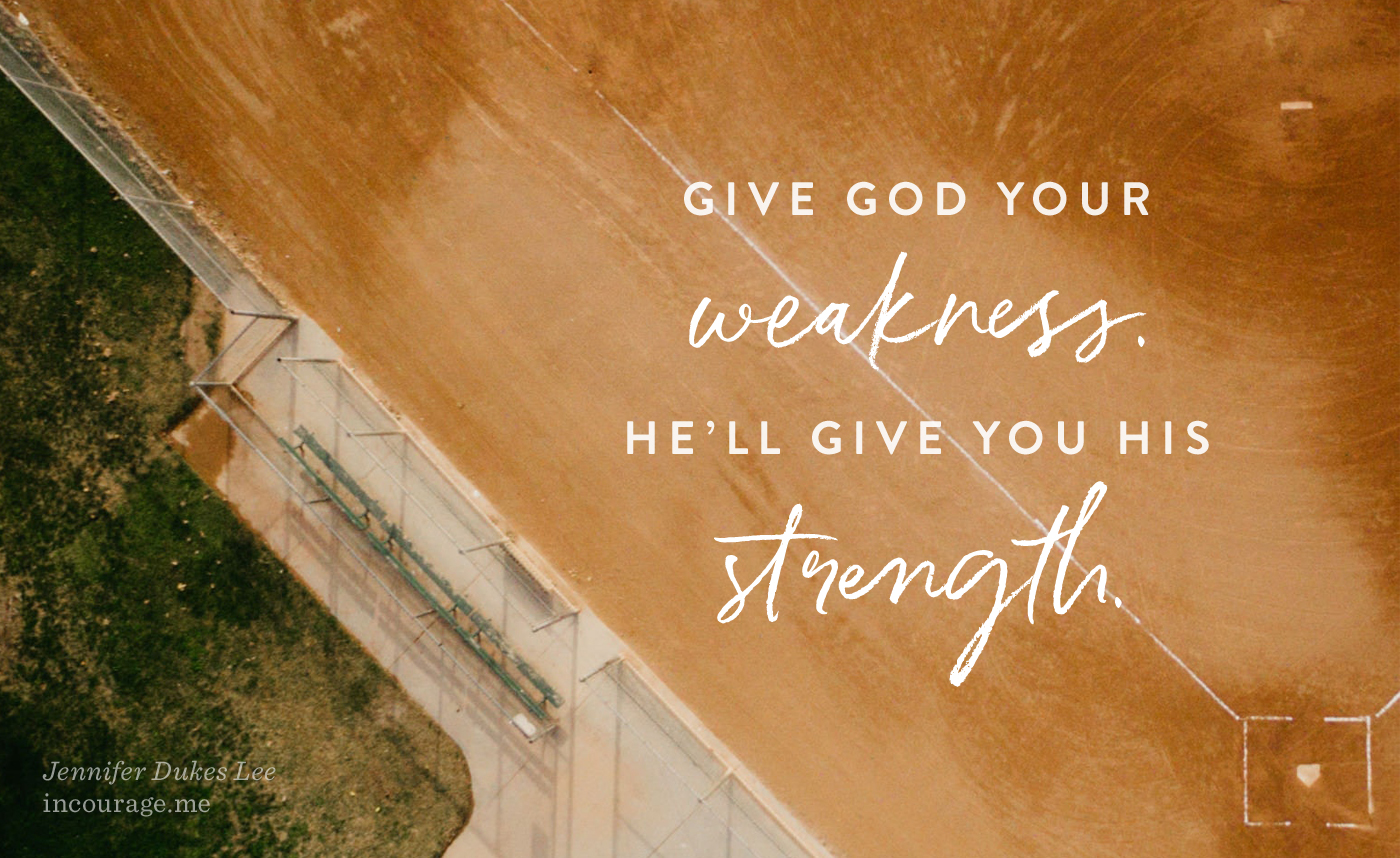 This is a story that begins on a high school softball field nearly sixty years ago.

But make no mistake. This isn’t some old story about some old game. It’s a story about anyone who’s ever felt like she was too broken, too battered, too weak, or too tired to go on.

So maybe, then, this is a story about all of us.

It was June of 1960. A big softball tournament was a day away. The pitcher was a young and spunky brunette named Joyce Dukes. (Yep, that’s my aunt.)

Well, she wasn’t my aunt yet. I wasn’t even a twinkle in anyone’s eye in 1960. Joyce was a high school senior. The day before that softball tournament, she was in a car accident that fractured her left arm. Joyce’s coach showed up at the hospital to find his star pitcher with a seven-pound cast on her arm. Let’s be frank. She was more than his star pitcher. She was the only pitcher on that small softball team from a tiny town in southern Iowa.

Joyce knew what her coach was thinking, and before he had much to say about it, she blurted it out, “I’m still playing. I’m still pitching. My left arm is fractured, but I pitch with my right.”

The very next day, Joyce was on the mound with a ball in her hand. She threw out a pitch, and it wasn’t long before she struck out a batter. And then another and another.

Before the game was over, she struck out seventeen batters in all.

There’s more. Instead of using a designated hitter, Joyce went to the plate to bat for herself, swinging with her one good arm. It must have been like a scene straight out of a movie, when that one-handed batter hit a two-run homer to win the game.

Her athletic feat didn’t make the big screen, but Sports Illustrated picked up the story. Recently, I displayed a copy of that little magazine article on my desk.

And maybe you need to know it too.

Maybe you need your inner Joyce to whisper in your ear. Her spunky self is calling out the biggest lie that keeps you from doing what you are called to do. Here’s the lie: you are too weak for this.

Yeah, you may be a little bit broken, but you’ve got some fight left in you. That fight has a name: the Holy Spirit. Because of Him, you are stronger than you know.

When I’m feeling a little bit broken and a whole lotta weak, these are the words that are saving me: “Give God your weakness. He’ll give you His strength.”

The same, overcoming spirit that made Christ obedient, even unto death on the cross, lives within us!

We are not a powerless people. We have more power than we can even fathom.

The Spirit of God, who raised Jesus from the dead, lives in you.
Romans 8:11 (NLT)

I think about how more than 2,000 years ago, people believed so strongly in that power that they would touch Paul’s handkerchiefs and be healed (Acts 19:12). People brought their sick people along the roadsides, on the chance that at least Peter’s shadow might fall on some of them as he passed by, so they too would be healed. (Acts 5:15).

It’s our turn. We are the generation of people called to do more than stand in awe at the empty tomb. We are called to believe that this power is real! We are called to move, to pitch, to swing for the fences, to preach, to serve, to minister, to pray, to take risks, to believe this truth: the same power that raised Jesus from the dead lives in us.

Head to the plate, baby. You’ve got a game to play.