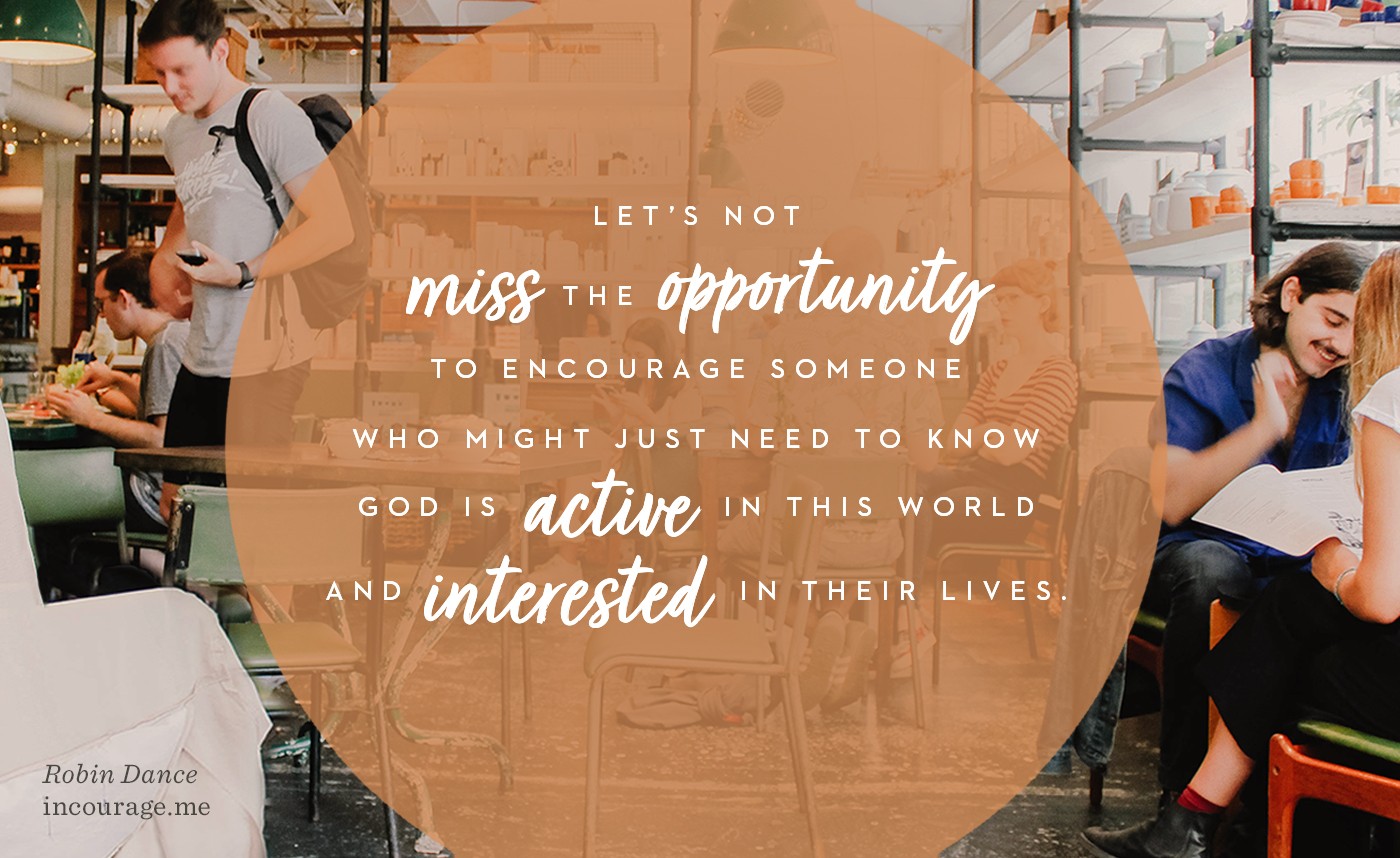 I wonder how many times we miss out on something special because we don’t listen to that nudge in our spirits urging us to do something that seems crazy or awkward. Do you know what I’m talking about? An inner prompting that feels like the Holy Spirit is calling you to action in a way that may make you uncomfortable but could bless another?

While on a mini vacation with my husband, I asked a friend familiar with the area for her favorite restaurant recommendations. Wanting something casual, we chose a place known for its local sourcing and exceptional wood-fired pizzas. We arrived just ahead of an evening rush we had no idea was about to hit, a good indication the food was going to be delicious.

The hostess seated us beside their large street-side window. A big group could fit nicely in this small nook by pushing all the two-person tables together, or, as was the case the night we were there, they could be separated for couples or paired for groups of four. One long bench provided seating on the interior side of the glass while chairs lined the far side of the tables.

A retired couple to my left was already enjoying their salads when we arrived, and right as we got settled, two young women snagged the table to my right. It was close seating among strangers, the kind that made drifting in and out of each other’s conversations impossible to avoid. I wouldn’t call it eavesdropping exactly, but it was hard not to hear snippets of chatter when there was a natural lull in our own conversation or when we were stuffing our mouths.

Because we were in a college town, it was natural to conclude the girls were students. They also seemed to be good friends. Their energy and enthusiasm was palpable, and their joy and affection warmed my heart. My mind slipped to thoughts of my own college best friend, and even to my daughter and her BFFs. The rarity of friendships that last a lifetime make them a treasure to be cherished.

I was intentionally trying not to listen to them, but as we were finishing our pizza, I couldn’t help it. They began “arguing” over who was going to pay for their appetizer. “I’ll pay for the poutine,” the first girl announced, and her friend just as quickly said, “You can’t do that, we’ll split it!” As they were going back and forth about how to divide their check, out of nowhere, I heard this voice in my spirit insist, “You pay for the poutine.” It was as loud as it was outrageous.

I argued with the voice inside my head, but it was emphatic, and I remember thinking, “Really, God? Poutine??” I considered paying for their whole dinner, but this holy nudge was that specific — poutine only. I had cash in my wallet — a rarity for me — and before I chickened out, I blurted, “No, I’m going to pay for the poutine!” and I slipped the money on the table. I told them I had never done anything like this before, but I felt a holy prompting I couldn’t refuse. Tad and I hadn’t even had time to discuss it, and I wondered if he thought I was as crazy as I felt.

Their gracious response was a far greater gift than the few dollars I doled out. The one right beside me, Amber, touched her heart and said, “Can I hug you?” and the one beside Tad, Rae, following Amber’s lead with a hug of her own said, “I can’t believe you did this!” Their gratitude was sincere and heartfelt, and even though I was self-conscious and it didn’t seem like much, I believed I was being obedient to a holy prompting.

Sometimes the best part of a meal has nothing to do with the food (unless the meal includes my apple pie, which some maintain is the best in the world).

Later, I wondered if this was something of my own doing, a random act of kindness I misattributed to God. That’s entirely possible. While I believe in this instance I was being obedient to something small He was asking of me, I know there are times when we’re mistaken. Regardless, I know I offered it with the right heart, in the spirit of 1 Corinthians 10:31:

So, whether you eat or drink, or whatever you do, do everything for the glory of God.

Whether or not God was the initiator, my motive was to glorify Him.

Even a modest offering sown in joy and love can reap abundant blessing, and in this particular exchange, I think I received a greater gift than the girls. My experience also makes me want to ask the Lord to sensitize my heart toward the needs of those around me. I don’t want to miss another opportunity to encourage someone who might just need to know God is active in this world and interested in their lives. As Mother Teresa said, “Not all of us can do great things. But we can do small things with great love.”

My Canadian friends have always behaved as if eating poutine — French fries and cheese curds covered in brown gravy — is a spiritual experience. I guess they weren’t kidding.

Have you ever been on the giving or receiving end of a holy nudging? Will you join me in praying for God to make our hearts tender so we’re ready to give whatever He asks?