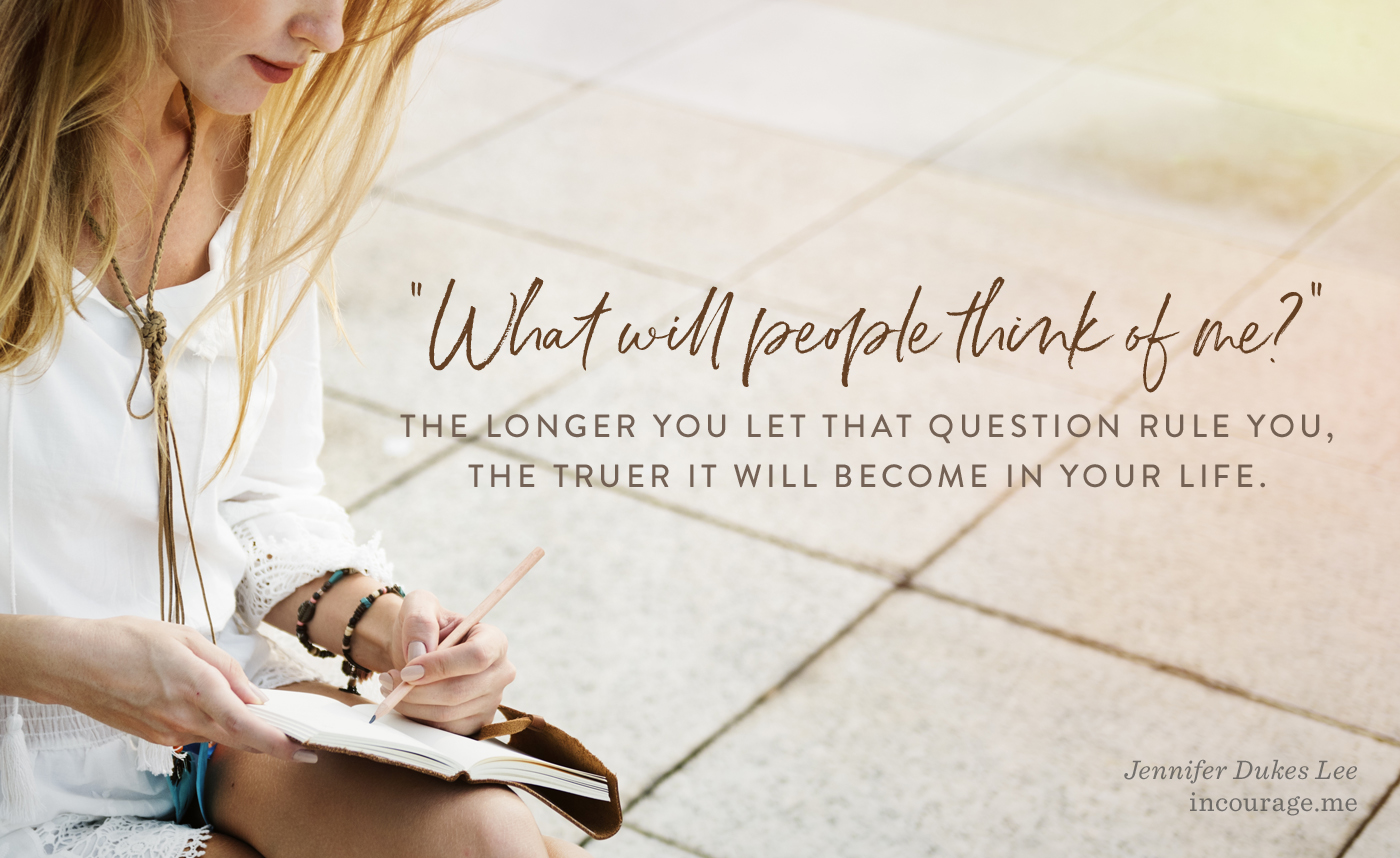 She wanted to sign up for volleyball that winter. Then again, she didn’t.

I watched my daughter from across the kitchen table, while our waffles grew cold. The sign-up sheet and a ballpoint pen sat between us, next to the syrup bottle.

“It would be fun — sooo much fun, Mom!” Her face lit up like a flashing LED display. “And my best friends will be on the team, and they’ll help me work on my serve.” With a swoop of an arm, she knocked over the syrup bottle.

Her whole face went dark, like there was some sort of internal power outage in her small self.

I set the syrup bottle back up while she continued. “But . . . what if I mess up? What will everyone think? And what if they laugh at my serve?”

I rolled the pen toward her, while her questions hung in the air. I didn’t say a word. She had heard me say it all, a hundred times before.

I’ve told her, “Daughter, this one question might ring in your ears all of your days on earth: ‘What will people think of me?’ The longer you let that question rule you, the truer it will become in your life.”

I know what happens with the words we tell ourselves as a kid. Unchecked, they amplify with age.

Suddenly, you’re a 21-year-old journalism student named Jennifer Dukes, afraid to compete for a news-writing award because you fear that the judges will disapprove of your work.

You’re 25, and when you’re applying for a promotion as a columnist in the metro newsroom, you give the editors what you think they want rather than writing from that sweet spot that is uniquely you. You don’t get the job; it goes to the woman who was never afraid to be herself.

You’re 30 years old, and you’re afraid to stand up and express your valid opinion at the PTA meeting because you don’t want to rock the boat.

You’re 40, and when you look in the mirror, you see brand-new flaws that came with age, and you wonder if everyone else sees them too.

If you aren’t careful, you become both master and slave: a master at reinventing yourself in the image of whoever you think you’re supposed to be, and a slave chained to your own approval rating. And you can see, on the playback, the places in your own history where your need for someone’s approval held you back in your one precious life. You see how it made you miserable at times, how it kept you awake at 3 a.m. with worry.

I’ve told my daughters how gymnasium scoreboards can morph into corporate tally sheets. People grow up thinking they want to be a modern-day Solomon, that wise guy with a sky-high approval rating and an abundance of accomplishments. Had he lived in 2018, Solomon could have tabulated his worth by degrees and plaques and Twitter followers. Time magazine may well have slapped his Photoshopped face on a glossy cover, dubbing him “Person of the Year.”

But in the end, what did he count it all as? “Meaningless, meaningless.”

I’m in my middle years now. That morning, as I sat with my daughter at the breakfast table, I silently thanked the good Lord that He’s been patient with me, even when I’ve sought the approval of people, over the approval of God. It’s a long story, but approval ratings have nagged me my whole life.

Yes, I really do know where my true identity lies. And more and more with each passing year, I am living what I know. But I still struggle. I want to know: How can I truly live unchained to man’s approval, with my face tipped to the heavens in complete freedom?

Maybe you want that too.

The Apostle Paul tells us how with these four words: “To live is Christ.”

Paul is throwin’ it down with a first-century nope-dot-com. “To live is Christ.”

My daughter and I both stared at the ballpoint pen, and I said two words:

"What will people think of me?" The longer you let that question rule you, the truer it will become in your life. // @dukeslee at @incourage: