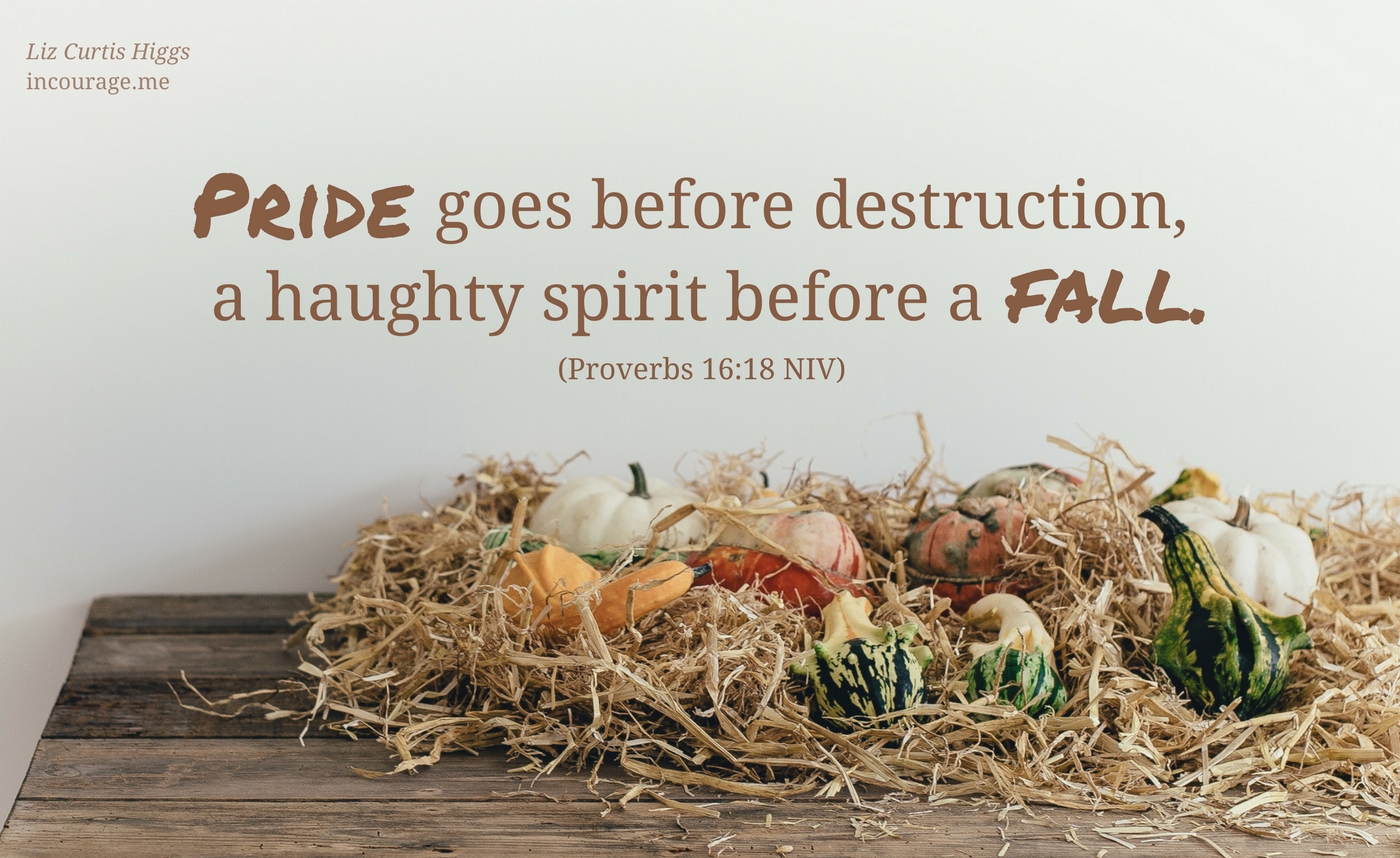 Pride trips me up every time. Thinking I’ve got this when I clearly don’t. Saying “No thanks” when I really need help. This verse from Proverbs nails it: “Pride goes before destruction, a haughty spirit before a fall” (Proverbs 16:18).

Notice how the Lord doesn’t say pride sometimes ends badly. No, it’s a guaranteed outcome. I remember one such time in particular. Oh, baby.

After speaking at a conference in Cape Town, South Africa, I had to fly to Johannesburg before boarding my eighteen-hour flight home. The discount airline — their motto was “More nice, less price” — permitted just one checked bag weighing no more than forty pounds. That meant my carry-on, jammed with books, weighed a ton.

When we landed and prepared to disembark, the crew didn’t wave those of us seated in the back of the plane to move forward toward the Jetway. No, no. Instead, they pointed to a long, flimsy set of stairs leading from the back of our big plane down to the tarmac ten feet below. It was more of an emergency exit. No railing, no sides, no kidding.

I took two steps down before the male flight attendant waiting at the bottom saw my dilemma and started up, his hand outstretched to take my overstuffed bag.

A smart woman would have stopped at that point and waited for help. An even smarter woman would have asked for assistance before starting down. But a foolish, prideful woman thinks, “I can handle this myself,” and takes one more step.

Over the side I went, heavy bag still in hand, plunging toward the ground headfirst. My thoughts at that moment were concise. This is it. This is how I die.

Seconds later I landed with a sickening thud. Then a wave of shock washed over me, followed by amazement. I had survived! Still lying on the tarmac, I did a quick head-to-toe check and was relieved to find I could move my head and neck, my shoulders and back, my thighs and knees.

But when I tried to sit up, a sharp pain shot through my right foot, still trapped beneath my bag. It took three people to help me stand and a wheelchair to roll me inside the terminal. The airport medic gave my foot a once-over, wrapped it in an Ace bandage, and sent me on my way, insisting that my foot wasn’t broken.

After a long, pain-racked flight home, I hobbled into my husband’s embrace, glad I’d decided not to call him from South Africa. What would I have said? “Hi, honey! I fell out of an airplane…”

Three days later the burning pain and swelling had grown worse. Three doctors later a diagnosis was made. My bones and muscles were fine, but the nerves in my foot were not.

When I looked up my symptoms on the Internet (not recommended), I learned that some patients with this condition end up in a wheelchair, and amputation might be necessary.

In the days that followed, I prayed like mad and did what I was told, attaching electrodes to my seemingly frozen foot and trying to wiggle my toes. God, in His infinite kindness, answered my prayers. By the end of the summer, I could stand without wincing, walk without crying, and approach a flight of stairs without having a meltdown.

If I’d just let go of that carry-on bag, I would have been injury-free except for some colorful bruises. But I didn’t let go. I hung on tightly, not only to my hand luggage but also to my pride, despite the Bible’s assurance that “a proud attitude brings ruin” (Proverbs 16:18).

My three crooked toes are a permanent reminder of that truth. So are these three lessons I learned about being humble instead of prideful:

Today we are excited to give away five copies of 31 Proverbs to Light Your Path by Liz Curtis Higgs. To be entered for a chance to win this beautiful book, please leave a comment sharing what lesson the Lord has taught you about the pitfalls of pride (or why you’d love to read this book)! The giveaway will be closed at midnight (CST) on Wednesday, November 1. Winners will be randomly selected and must live in the U.S.

©2017 by Liz Curtis Higgs. Adapted from 31 Proverbs to Light Your Path. Published by WaterBrook. All rights reserved.

Your unique gift, your untold story, your broken and mended heart, your fierce love, your brave authenticity create a tapestry He wants to use to unveil His love to someone who needs to experience it. -Jen Schmidt (@beautyandbedlam)

Don't miss this giveaway from @incourage of 31 Proverbs to Light Your Path by @LizCurtisHiggs!