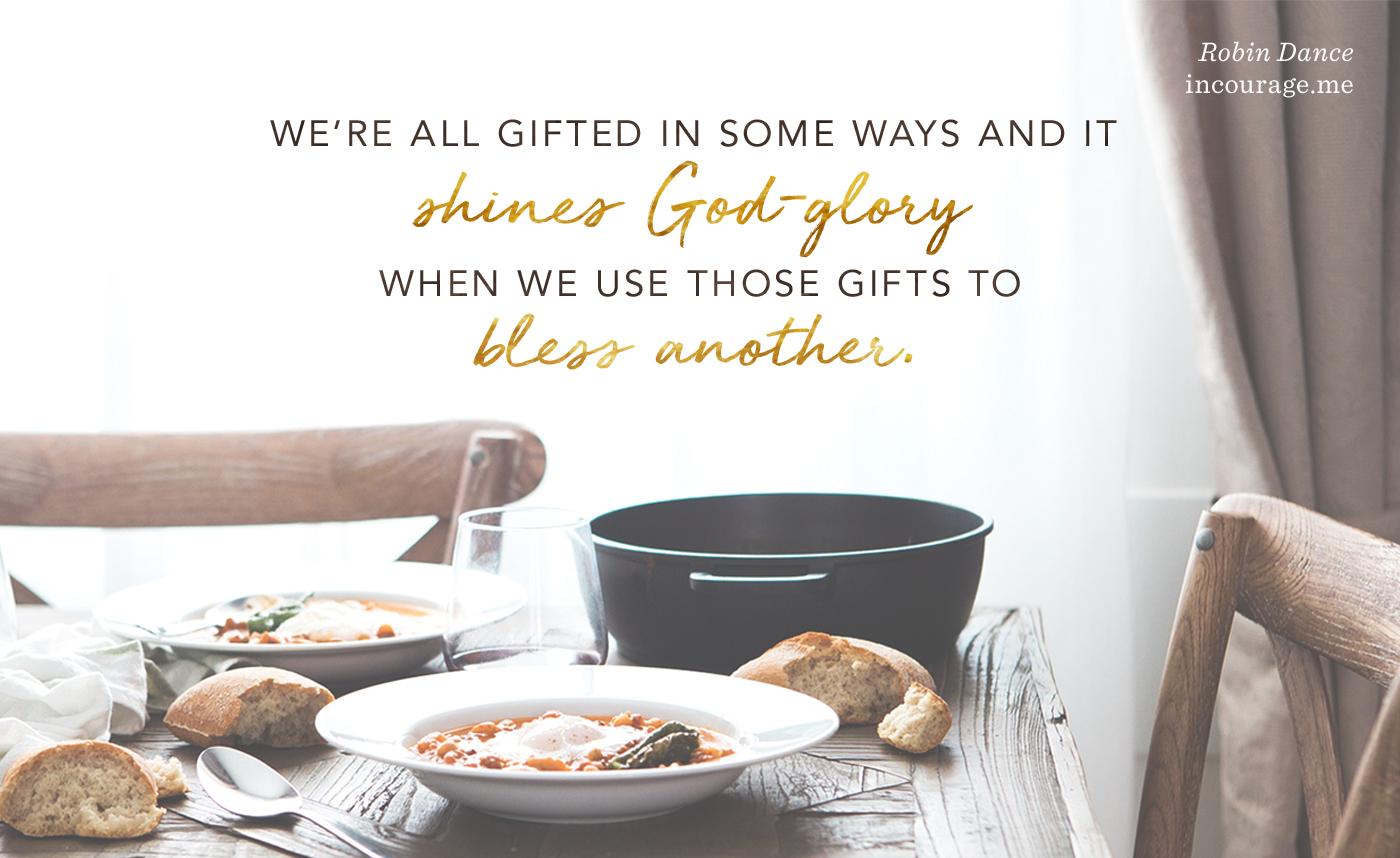 Each of you should use whatever gift you have received to serve others,
as faithful stewards of God’s grace in its various forms.
1 Peter 4:10 (NIV)

In my current season of life, it’s often just me and my husband for dinner. Sometimes when I make a recipe that could feed an entire family, I’ll divide it in half and pray about who could use a meal, especially if it’s something that doesn’t freeze well. Recently, my friend Tracey and her family were moving to a new house, and they came to mind as I was making my friend Leigh’s (Almost) Famous Shrimp and Grits Casserole. My job had ramped up preventing me from helping with the physical move, but maybe food would help in a different way.

Almost as quickly as Tracey came to mind, I came close to talking myself out of offering her dinner. This wasn’t exactly a planned meal. I hadn’t made dessert and didn’t have additional side dishes to take. I did have a fresh loaf of my homemade sourdough bread, though, and sliced watermelon from the night before.

Those ugly voices inside my head were trying to shame me into not reaching out. They were hissing those tired old lies we’ve all heard before:

You’ve known about Tracey’s move for weeks and this is the best you can do?

Why didn’t you plan better?

Wouldn’t they have asked if they needed help?

Instead of letting second-guessing get the best of me, and even though I felt uncomfortable — I love Tracey and was full of self-loathing for not being a “better” friend (add that to the stack of lies above) —  I stuck to one of my favorite mantras: Don’t say “No” for her.

So I sent her a text and asked if they’d like a shrimp and grits casserole.

She answered Yes! and quickly.

After I loaded up the casserole, watermelon, and bread and started to back my car out of the drive, it hit me THEY WERE MOVING and all of their stuff would probably be buried under an avalanche of boxes. I ran back to my house, grabbed the only paper plates we had (Christmas), napkins, four forks, a knife for the bread, and serving spoons.

I got in my car when again it hit me: not only did they probably not have drinks, they likely didn’t have cups yet unpacked. I ran back into the house, found the only Solo cups I had (orange, Go Tigers!), and grabbed a cold raspberry Schweppes Ginger Ale  (delicious, if you’ve never tried it).

And, then, with a healthy sweat going from all that back-and-forthing, I was finally on my way.

I arrived at Tracey’s to find boxes floor to ceiling and her family in the throes of unpacking. She welcomed my raggedly little meal like it was a scrumptious feast. I felt silly and awful that I hadn’t done a “better job” of cooking a spread for their family, but she just kept thanking me and told me I was a lifesaver.

As I drove home, I regretted not taking a picture — everything was comically (embarrassingly) mismatched. Yet, although that dinner was about as thrown together as they come, it was made and offered with love.

I thought about how hard we are on ourselves and about the mean, negative inner dialogue we’d never speak to another. How we can talk ourselves into not reaching out or serving or loving with the very gifts we’ve been given. I promise you, the only one who is pleased by this is Satan; when we’re influenced not to love on someone, we’re allowing him to rob the joy and blessing from the would-be receiver.

We’re all gifted in some way and it shines God-glory when we use those gifts to bless another.

The 1 Peter 4:10 passage above tells us in doing so, we’re stewarding God’s grace. If we let that sink in – I mean d e e p, into the marrow – it can change the way we serve and love others. Look at this same passage in The Message:

Love makes up for practically anything. Be quick to give a meal to the hungry, a bed to the homeless — cheerfully. Be generous with the different things God gave you, passing them around so all get in on it: if words, let it be God’s words; if help, let it be God’s hearty help. That way, God’s bright presence will be evident in everything through Jesus, and he’ll get all the credit as the One mighty in everything.

“Love makes up for practically anything . . .”

(Thanks to Tracey, who graciously took time to photograph proof that I wasn’t exaggerating :). I called her and asked her to take a picture when I “wrote” this post in my head after leaving her house.)

It shines God-glory when we use our gifts to bless another. // @robindance at @incourage: