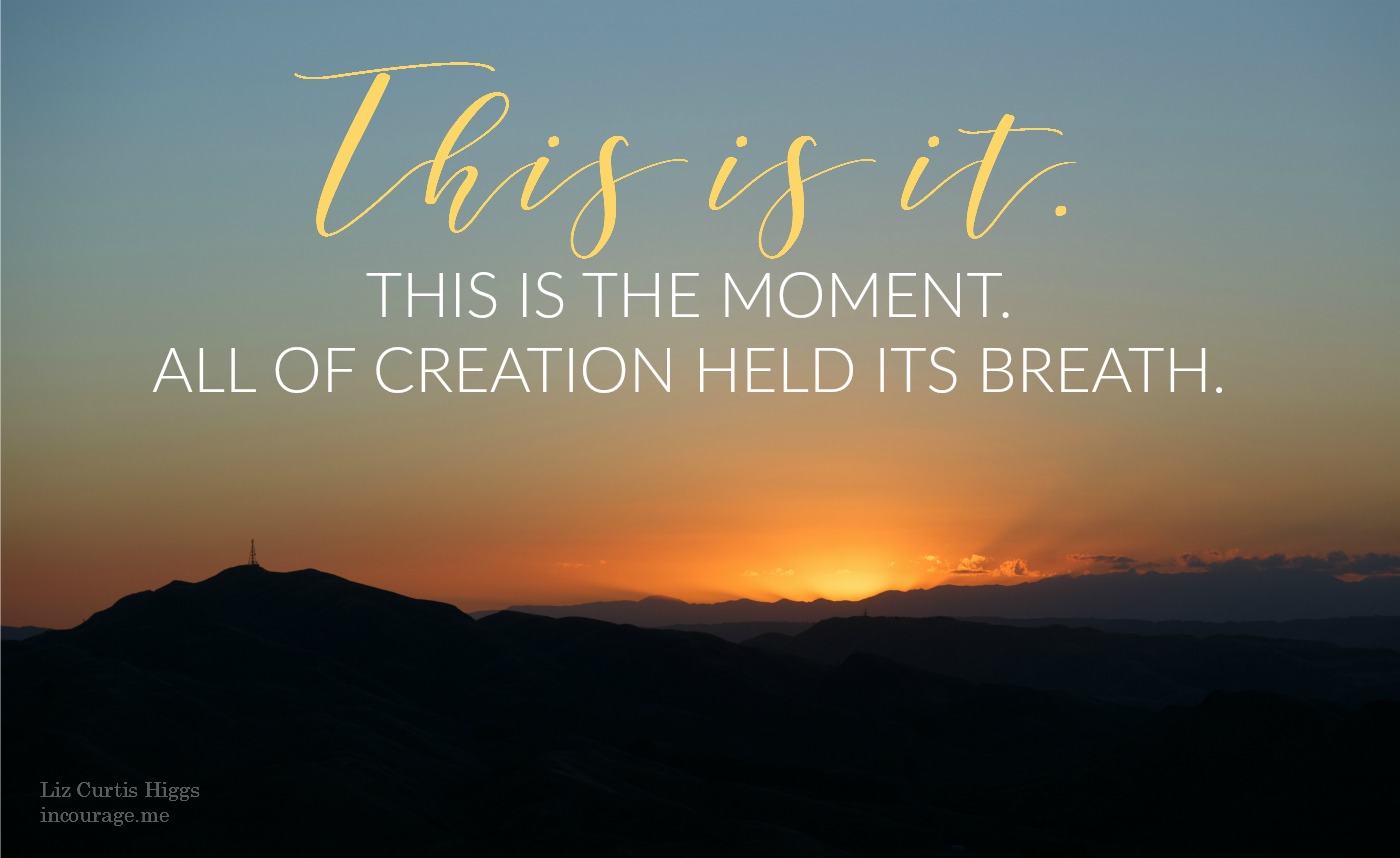 When our kids were little, Easter morning meant baskets full of chocolate bunnies and bright plastic eggs hidden between the sofa cushions.

But the first Easter morning? Another story entirely. An amazing one.

The women who loved and served Jesus woke before dawn, quickly dressed, and gathered their fresh spices in woven-reed baskets, eager to return to His tomb.

The hour is described in precise detail — “very early in the morning” (WE), “just as the sun was coming up” (CEV) — capturing that brief moment when the heavens were still a velvety dark blue and only a hint of daylight brushed the eastern sky.

I’m not usually up and about that early, but on mornings when I wake before dawn, I find myself gazing out our kitchen window, awed by the swiftly changing colors. The whole day stands on tiptoe, waiting for the sun to crest the horizon. It’s only a matter of minutes, but oh those minutes! Charged with anticipation, filled with hope.

Light hurrying to meet the darkness. Life hastening to find the dead. Was there ever such a morning in the history of the world?

Think of it! Jesus Christ — the Holy One, the King of kings, the Savior of the world — was conquering death at that very moment. The dozen men who’d traveled everywhere with Him were nowhere to be seen. But the women — the few, the faithful, the resourceful — were headed to the grave for one simple reason.

The Lord wanted them there.

Our Sovereign God didn’t leave a single moment of His Son’s resurrection to chance. He knew from before the beginning of time that these women would be the first to know, the first to see. The male disciples weren’t neglecting their duties. They just weren’t called to be there.

God chose women to serve as His witnesses this day. Yes, He did.

Archaeologists believe the entrance to the tomb was no more than three feet high and two feet wide. The only way to enter was to assume a posture of humility — head bowed, torso bent. Our women were prepared to find a body, fragrant with myrrh, but they were not expecting an angel dressed in white.

In their fright the women bowed down with their faces to the ground. (Luke 24:5)

With their foreheads pressed against their hands, the women could do nothing but wait and trust. Would this lightning-white being speak? Or would he strike them dead?

No wonder God’s heavenly messenger began with the words, “Don’t be alarmed,” meant to calm their fast-beating hearts. Did the Marys exchange glances and then slowly inch their hands toward one another to bolster their courage? Even though the angel assured them they had no reason to fear, it’s hard to stop shivering once you start.

The angel’s next words were a statement, not a question. He knew why they’d come and whom they were seeking.

“You are looking for Jesus the Nazarene, who was crucified.” (Mark 16:6)

This is it. This is the moment. All of creation held its breath.

Yes, He has, beloved. This glorious truth has the power to transform everything and everyone, including us. He who was dead is now alive forever. And because of Him, we have the certain hope of eternal life. Let the celebration begin!

This Easter, how could you make His resurrection the centerpiece of your morning? Share your ideas in the comments. Five winners will be randomly chosen from the comments after 12 p.m. (CST) on March 28 to receive a copy of The Women of Easter.

©2017 by Liz Curtis Higgs. Adapted from The Women of Easter: Encounter the Savior with Mary of Bethany, Mary of Nazareth, and Mary Magdalene. Published by WaterBrook. All rights reserved.

He who was dead is now alive forever. Let the celebration begin! //Love this from @LizCurtisHiggs at @incourage: