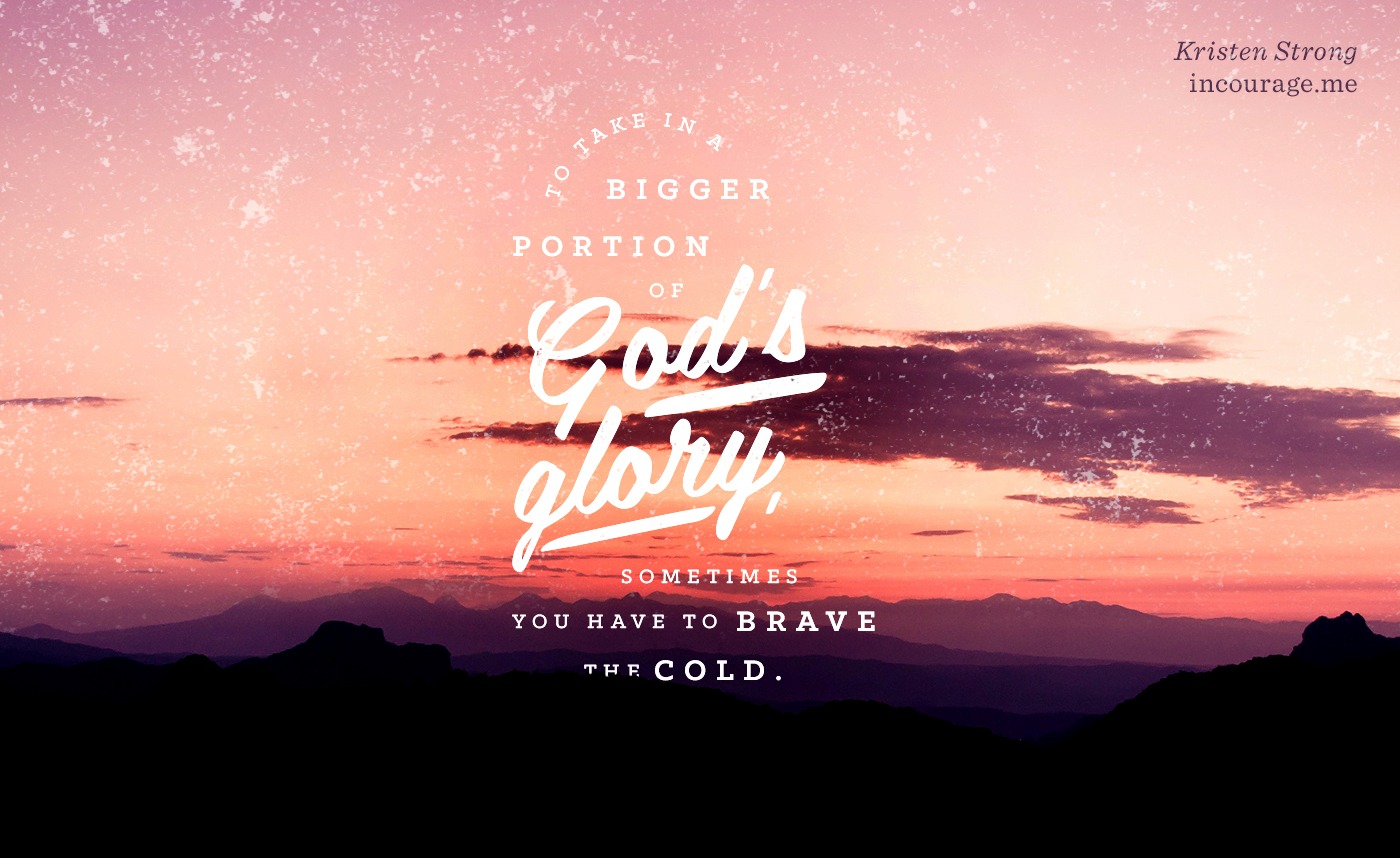 I woke up to my phone’s alarm, the screen radiating a too-early time. I ambled downstairs and flipped on our gas stove before walking into the kitchen and pulling my chai latte fixings from the fridge. It wasn’t till I dropped two pieces of bread in the toaster that I noticed the entire room blazed coral pink.

Grabbing my phone, I slipped open the sliding glass door near our kitchen. My bare feet stepped from the warm, toasty room onto the cold wood planks of our side porch. My breath caught first from the frigid morning air and then from the sight before me.

For a good long while, I snapped picture after picture. Several times I shivered in the cold, but I just couldn’t quit the scene before me.

Finally I lowered my camera and headed back inside, but I couldn’t let go of this one thought:

To take in a bigger portion of God’s glory, sometimes you have to brave the cold.

Several months ago, I wrote about my struggle with fear on several fronts. Releasing a book found me “out there” to a greater degree, and while I don’t exaggerate my visibility or recognition, I still found myself afraid to be more fully seen. Then there’s the fact that raising three teens is chock-full of scary possibilities. Other circumstances poured into the fear-cocktail too. And while I can honestly say I originally hit these challenges with courage head on, as the battles persist, I’ve become bone-weary in the fight.

I know the way to stop unraveling into the fear is by folding myself into the Gospel. And as I’ve sat with Jesus, He reaffirms that it’s okay to live from how the Creator made me and out of His love for me.

But as is the case with much in life, problems don’t disappear overnight. More often than not, we don’t get over them. We move through them with slow, persistent work.

And in this middle place of working through something—in the space between moving courageously and waiting for something to change—you can lose your gumption.

Hope gets buried beneath 50 layers of defeated thinking, and you’re sure you’re making all the wrong moves.

I’ve been there, and as I read through Exodus 14, I see Moses and the Israelites have been there too. In this passage of Scripture, Pharaoh had just freed them from captivity, and the Lord then leads Moses and His people onward and away from Egypt. But sometime shortly thereafter, Pharaoh changed his mind and goes after God’s people.

As the Israelites camped near the Red Sea, all of Pharaoh’s army barreled down on them. When the Israelites saw them approaching, they were full of fear and began questioning every move that brought them there. Moses spoke up and said,

Then the Lord unzipped the Red Sea’s waters so that the Israelites could cross. Once they reached the other side unharmed, He brought the waters back together again over the entire Egyptian army.

The Israelites were scared, yes, but they leaned into that promise: The Lord will fight for you.

And they moved forward.

I don’t know the details of your circumstances or situation, but if you’re plumb haggard and fear is making you question where you’re at right now, please hear this:

Keep on keepin’ on. You’ve got this.

Be strong, and let your heart take courage; all you who wait for the Lord.

It doesn’t say have courage, it says take courage. Keep on keeping company with Christ and ask Him to take your fears and to embolden your courage.

Bravery is not the absence of fear but following God through the fear as you believe God’s promises. It’s holding on to the facts of your faith more tightly than to the fears for the future.

Hold the hand of hope knowing God will not waste this season. It’s cold now, yes, but it won’t last forever.

We will sing to our souls
We won’t bury our hope.
Where he leads us to go.
There’s a Red Sea Road.

When we can’t see the way
He will part the waves.
And we’ll never walk alone down the Red Sea Road.

Take courage, dear ones: the fight is not over. You have not lost. You’ve made it to the edge of the shore, where the waters will part.

You’ve made it to the edge of the sunrise where God’s glory waits.

'The way to stop unraveling into fear is by folding yourself into the Gospel.' @kristen_strong at @incourage: