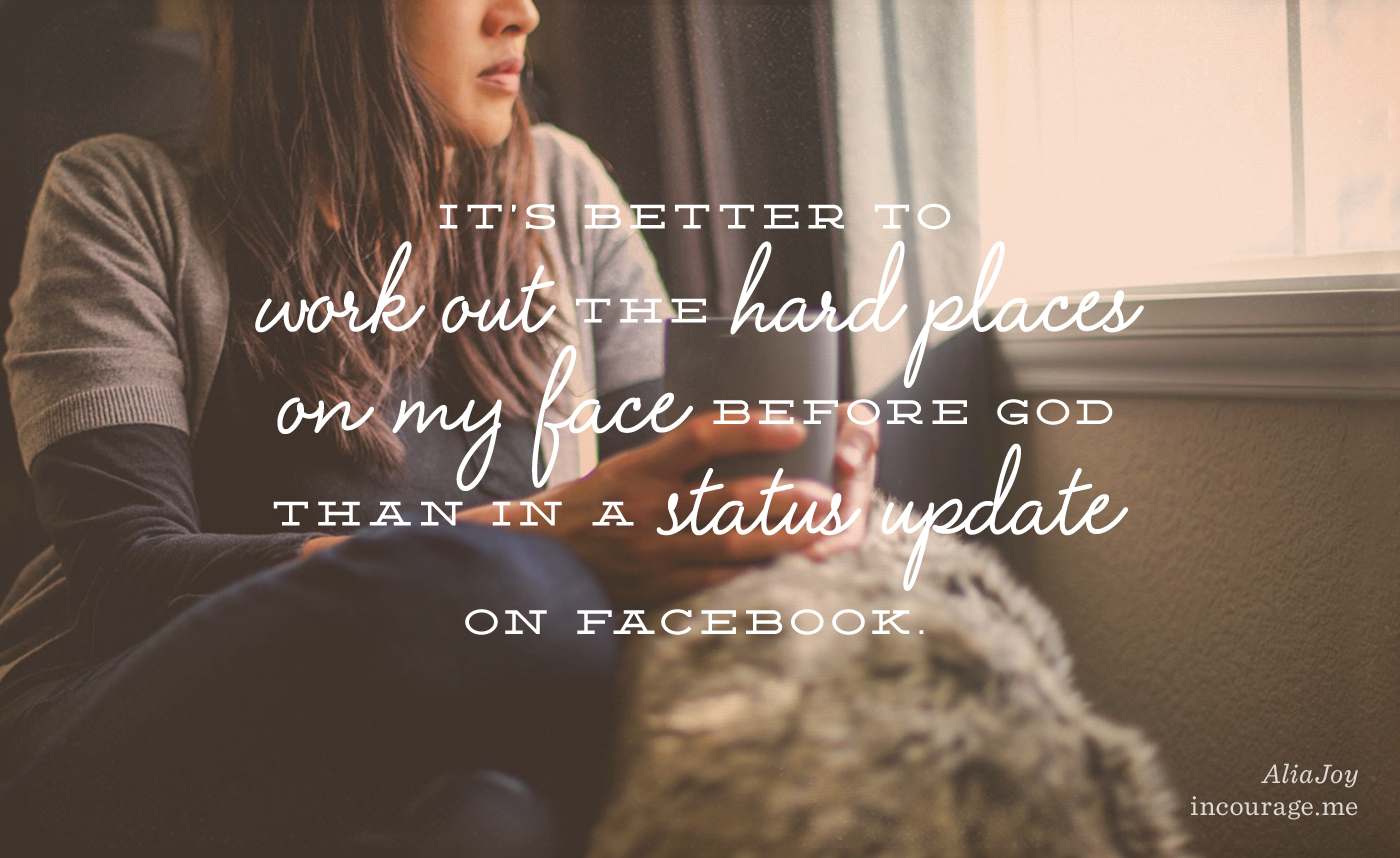 The Past few Sundays I’ve watched my family pile into the car and pull out of our driveway on the way to church. I’ve chosen to stay behind. First it was because we got a new puppy, and he couldn’t last that long alone. Then it was because I was having severe back pain, and I could’t sit up that long. But then it was because I didn’t want to go.

I didn’t want to be around people.

I chose to listen to a sermon podcast instead. I cleaned up the house, lay in bed, and watched the sky turn milky with clouds and heavy rain like it was mourning too. I cried a lot and thumbed through my Bible like I was tuning a radio station but all I was getting was static. Nothing spoke to me, the Scriptures just blurred on the page. Mostly I talked to God.

Lately the world has felt like it’s not just divided, but ripped apart at the seams, and the unraveling crisscrosses the very center of me. I’ve felt raw and tender and couldn’t imagine making conversation with people about the weather or my health or our new puppy. I couldn’t imagine talking about the election without me falling apart. So I stayed home, because home didn’t ask anything of me. It needed no response, it needed no thoughts to be weighed or words to be chosen. It needed only to let me rest.

I left my phone charging in the bedroom and my laptop sealed shut against the Pandora’s box social media has become. I don’t want to waste words when all I have are questions. When all I have are prayers. So I flipped through the Psalms and listened to the echoes of my heart.

The searching and the pain, the confusion and anger and praise. It’s better to work out those hard places on my face before God than in a status update on Facebook.

The day after the election, people called and messaged and asked me how I was doing. It’s no secret I was grieving. There’s no outcome that I could have rejoiced at this year, but the lament from friends who were hurting and scared was more than I could bear. The cry of the Church, howling with the pain of anger and misunderstanding, accusations and defenses, pride and grief, was too sad to behold and in it all, those same struggles were bound up in my nerves.

I watched friends and family choose sides and plant themselves against each other. I saw it mirrored in my tendency to want to do the same. To be justified, instead of seeking justice. To want to be merciful to some but not to others. To choose grace, but only for those I think deserve it. Oh, the hypocrisy in me.

How easy it is to stand against one thing only to find you’re becoming what you’re against.

The ironic thing is that it’s easy to pride myself on loving the heart of God. I care about justice — give me the poor, the weak, the outcast, or the other, and I become mercy to their wounds. I care about grace — give me the lost, the broken, the weeping wanderers, and the misunderstood, and I will sit with them. I will weep with them and feel every tear. I will offer space to come and meet my Jesus.

I know what it is to be ransomed and loved back to life.

Because when I think of my neighbors, I think of the least of these and my heart is overwhelmed with tenderness. But lately, I’ve realized when God asks me who my neighbor is, they have never been those on the other side of the cross. That comes easy for me.

When Jesus asks me who did I command you to love, I know exactly who He’s talking about. Maybe you do too?

Because sometimes I want an effortless love. I want an affinity group, not a community, not a body. My cousin who is a pastor says, “It’s not community until someone you don’t like shows up.” Truer words were never spoken.

Christian community has always been difficult for me. In the past decade I’ve come to love the church, both local and global, but that almost makes things harder. When church was nothing more than a Sunday to-do, a place to go sing a few songs, listen to some sermons I’ve heard a million times, and skim over superficial conversations, it didn’t affect me because I wasn’t connected enough for it to matter. It didn’t cost me anything but a little extra sleep on Sunday mornings.

These days, it’s my idealism that cripples me.

I’ve withdrawn from a lot of Christian friends and communities. It’s my longing for more that tempts me to pull away because the cost of building relationships with people who don’t think or live the way I do is so great. It’s tiring to always leave things unsaid, to always weigh my words, to feel like I’d just be causing problems everywhere I go because I often see things so differently. It’s hard to be passionate about things without being overwhelmed. It’s hard to feel lonely or misunderstood. It’s hard to always feel a bit on the outside and to realize that it’s partly my fault for placing myself just out of reach. It’s hard to continuously leave the community you know you are called to because it’s uncomfortable. I am Jonah running from God’s voice.

Give me the guts of Jesus’ Church and I’ll want to look away. I’ll want to stay home. I’ll wish that God had some other less messy method of demonstrating the Kingdom of God besides His people. I’ll wish I had a different answer when Jesus asks me, “Who is my neighbor?”

Loving the heart of God will always call you toward uncomfortable love; there isn’t any other kind.

May we reach to learn beyond our current understanding, listening and hearing in a new way. And may we seek to see humanity as we were designed to be and continue the work toward change and freedom. -@brownicity: https://t.co/1xzBhZKh9Q https://t.co/CoRiIKLrak

Being seen and understood goes a long way toward healing the pain. by @aliajoyh @incourage http://bit.ly/2foyaMO