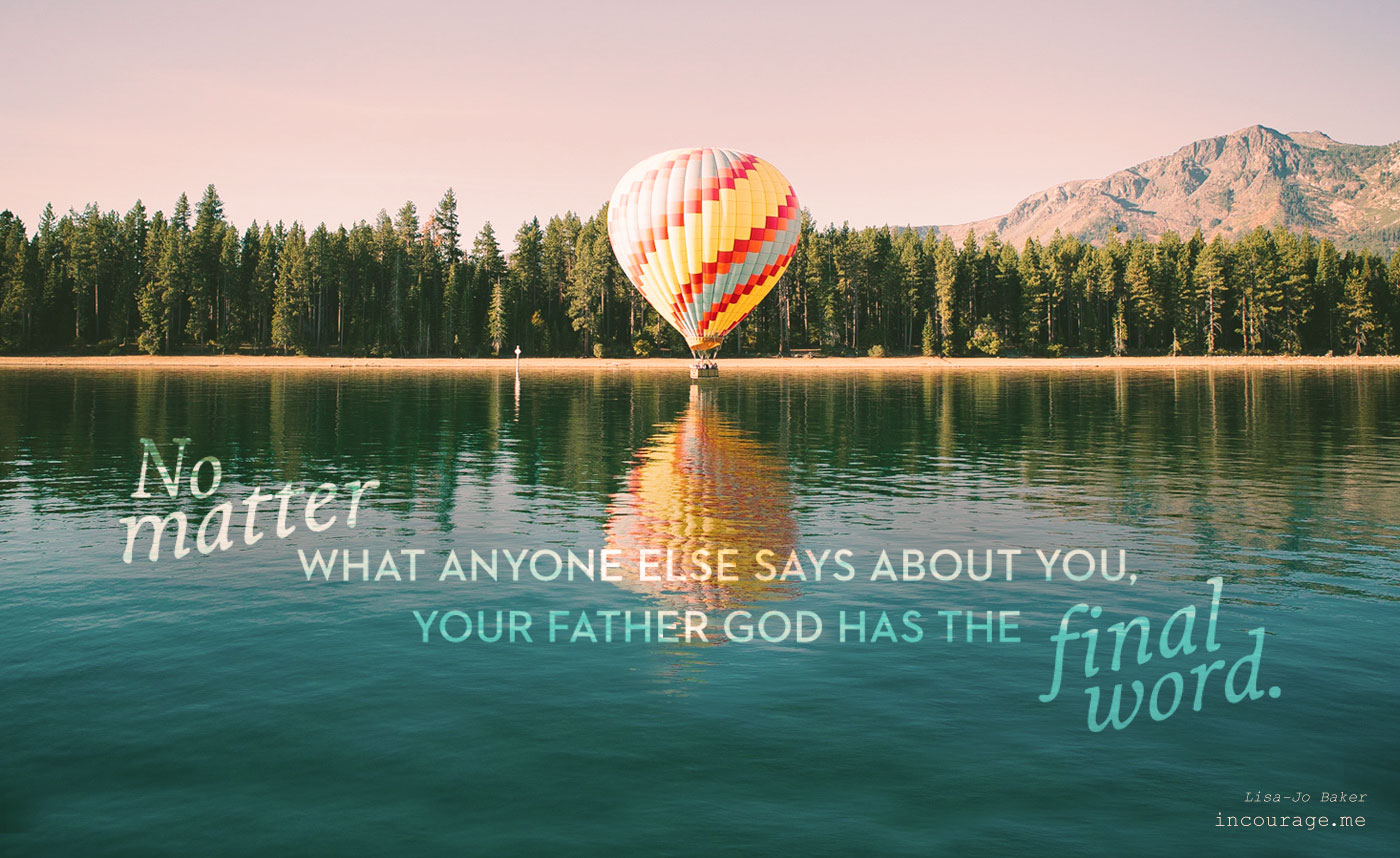 I have a son who calls himself names.

As his mother it’s excruciating to hear.

It takes my breath away to listen to how he talks to himself.

Anytime he makes a mistake or a bad decision or can’t seem to get his shoelaces untied from their tangle of knots I’ll hear him mutter — Idiot! I’m so stupid!

It hurts because it means there’s a core lie he’s believing about himself that has somehow wriggled deep under his skin until it feels like it’s part of him. Until he believes it enough to start preaching it back to himself without question.

I was thinking about that the other day as I was loading the dishwasher and eavesdropping on my son. As I lined up all the blue plastic cups and the sticky knives and forks I caught an earful again of my son’s impatience with himself.

Most of the time I don’t think we’re even aware how we’re talking to ourselves. It comes so naturally to be crushingly cruel to ourselves. To disdain how much we accomplished in a day, how little we think of our own ability to love or reconcile or work out or keep up with the dirt and dust that collects under the dining room table.

But the names we call ourselves matter.

I know this because I know how damaging it is to listen to my son, my beloved, brave and beautiful son, call himself, “Stupid.”

But if I’m honest, if I were naming myself, there are days I am tempted to call myself something along the lines of, “Lost her temper again” or “Can’t keep up with the dishes” or “Constantly doubts herself.”

I don’t know about you, but often I approach God like He is disappointed in me. Like my life is a tangle of knotted up shoelaces I can’t make sense of and I have to constantly apologize for my own stupidity, my mistakes, my pride, my laziness. For the years I worry I’ve wasted because they were so consumed with thoughtless selfishness.

I can get so bogged down in what I get wrong that the names of shame and despair role right off my tongue until I believe that God believes those names about me too.

But last night a friend asked me, what if we approached God like He delighted in us? What if I believed that He liked me in spite of all my stupid mistakes.

Then she sent me to read Isaiah 62:4 and it took my breath away:

No longer will you be called Deserted [or stupid or shameful or reckless or careless or irresponsible or unworthy or unloved].

Instead, you will be called, My Delight is in Her.” {Isaiah 62:4, emphasis mine}

I read it two or three times. I underlined it. And then I got out a notecard and wrote that new name for myself out in thick, blue ink. And I posted it above my computer.

Lisa-Jo, you will be called “My Delight is in Her.”

That night after dinner I told my kids that story. I told them all the terrible names I would give myself. We talked about how easy it is to be frustrated with ourselves. How we can be so disappointed in our own behavior that we punish ourselves. And that we forget to stop punishing ourselves. That we say mean things to ourselves because we think we deserve it.

I looked into their knowing eyes and asked them what they thought God would call them. What kind of name He whispers when He thinks of each of them, when He watches them fall asleep at night or play soccer or show up for summer camp.

And then I told them to go and read the notecard that was above my computer and they came back grinning.

And if that’s the name God calls us what business do we have to go insulting His children? From now on in our house I hope that’s the reminder lingering in the back of our minds on the days we disappoint ourselves again. That we are loved by a God who names us Delight and not Disappointment.

Amazing that I can claim such a name. And that you can too. As a child of God it is your birthright. No matter what anyone else says about you. No matter what you say about yourself. Your Father God has the final word. And He says, My Delight is in Her.

No matter what anyone else says about you. Your Father God has the final word. @lisajobaker at @incourage: https://aws.incourage.me/?p=179411