I watched as the orangish-red liquid dripped into the tube, and eventually into my veins. I wondered how long it be until I was sick. Until my hair fell out. This is not where I thought I’d be at 35 years of age. I thought by now I would be a mom, and maybe a homeowner. But I was nowhere near that.

My husband and I had already been through so much already. A miscarriage and infertility. Drug addiction. An affair. The death of his brother to the war in Afghanistan. All of that in our first five years of marriage. The next few years were great, and by great I mean they were uneventful.

But in December of 2013, I went for a routine check-up with my OBGYN. At last year’s appointment she had asked me to track my ovulation. I went in hopeful as the next step was to place me on a medication to aid in ovulation. During the exam she found something. A palpable lump in my left breast. She sent me to have a mammogram, which due to dense tissue was inconclusive, so from there an ultrasound. The mass was two centimeters in size and showed some calcifications. A needle core biopsy was ordered for New Year’s Eve, and on January 3, 2014, I was diagnosed with stage II triple hormone positive invasive ductal carcinoma — an aggressive form of breast cancer.

Most of the next several weeks were a blur. Multiple doctor appointments, tests, scans, consultations, and then a surgery to remove the tumor and to place a catheter port just below my collar bone to administer the medications I would need. Our talks about the future that were once about buying a home and having children were replaced with questions that had no answers.

How did this happen? What do we do? What if?

Late one night while leafing through an old study Bible, I saw a verse I had written in the front cover.

Jesus said, “I have told you these things so that in me you may have peace. In this world you will have trouble. But take heart! I have overcome the world.” {John 16:33 NIV}

Although I had read it a thousand times over, the exclamation point in that verse stood out to me for the first time. Although our lives will most certainly not be easy, Jesus meant what He was saying! And He was saying it to me.

Over the next several months, I endured 20 chemotherapy treatments, 33 radiation treatments, 25 Herceptin infusions, and an eventual radical hysterectomy.

God granted me peace in whatever the outcome, and He gave me the courage to fight.

I had read where people would choose a “life verse” to cling to in difficult situations. I chose 1 Peter 5:10 (ESV):

“And after you have suffered a little while, the God of all grace, who has called you to His eternal glory in Christ, will Himself restore, confirm, strengthen, and establish you.”

During all of this, the support my husband and I received was overwhelming. Friends brought meals and sent money, gift cards, and greeting cards. They made quilts and prayer shawls they had spent hours sewing, knitting, and praying over.

Friends prayed with us, encouraged us, and cried with us. They were the hands and feet of Christ.

My last treatment was in April 2015 and my last surgery was in July of the same year. I am now officially cancer free.

This past fall I was able to take a Bible study and art class in one called “Out of the Darkness and Into the Light.” One of the verses we studied was 1 Peter 2:9 (NIV):

“But you are a chosen people, a royal priesthood, a holy nation, God’s special possession, that you may declare the praises of Him who called you out of darkness into His wonderful light.”

It became evident. God delivered me. After I had suffered a little while, He restored, confirmed, strengthened, and established me. He had brought me out of the darkness and into the light.

He wants to deliver us all. We just have to take heart!

God, grant me peace, whatever the outcome may be. {Tweet This!} 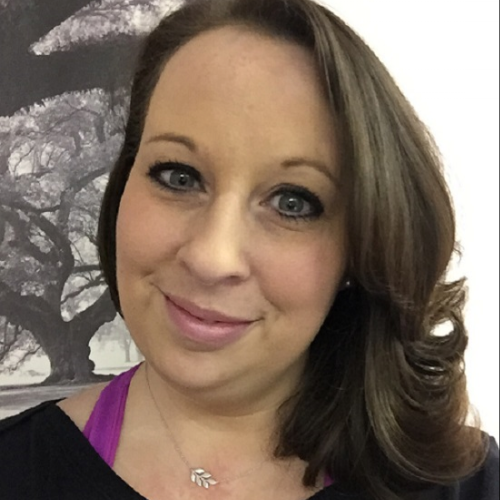 Ashlee is a pastoral executive assistant in Tennessee, where she lives with her husband Mark and their dog Reb.