Leaving the gym I was sweaty, stinky, and my hair looked as though I had styled it by sticking my finger in an electrical outlet. I was in no mood to be in the public eye, yet one chore remained on my to-do list for the day — my family needed a gallon of milk.

Driving home, I stopped to pick up some milk at the small gas station near our house, rather than make a cameo appearance at our small town supermarket. I parked the car, smoothed my hair down as best I could, and applied a liberal amount of lip-gloss, as though that would make a difference.

When I entered the store, I didn’t even bother to remove my sunglasses, hoping that by some stroke of luck I would retain a sense of anonymity similar to that of celebrities trying to dodge the paparazzi.

Then I saw her. Hunched behind the counter was a tiny clerk who had certainly seen better days. She wore an old shade of bleached-blonde hair. Wrinkles and scars tattooed her arms and face. As I approached the line at the counter, milk in hand, I gave her a little grin. She did her best to reciprocate with a half-smile, trying not to reveal her lack of teeth.

The words flooded my mind as I waited my turn in line.

We ask this knowing that yes, He is indeed talking to us, but for some reason we’re hoping that maybe He got His channels crossed and He meant that message for someone else.

I’m not one to typically greet strangers or go out of my way to initiate conversations with people I don’t know. I come from a past that’s freckled with what most would call “trust issues,” and because of this, I tend to keep up my guard and keep to myself if I can help it.

But God has been working to change that.

Ask her how she is.

There it was again — distinct and clear. God wanted me to reach out and talk to the cashier. As I made my way closer, my palms grew a sweaty, and I felt as though someone had cranked the heat up to 150°. Realizing my turn was next, I decided that if I was going to make conversation, I should at least start by removing my sunglasses.

Finally, after an agonizing five minutes, it was my turn. Placing the milk on the counter, I cleared my throat, beamed, and asked, “How are you this evening?”

Startled, the cashier looked up to make sure someone was actually speaking to her. No longer invisible to the world, she had been noticed, and her eyes said it all.

So she told me about her back pain and how she had no one to help her out around the store. I listened. I affirmed her. And I left bestowing a friendly smile and a generous good-bye wave.

Heading down the road I was feeling pretty good, when all of a sudden it hit me.

I was so close to giving her a cool drink of water, but I didn’t quite accomplish what was in front of me. Jesus told his disciples:

“If you give even a cup of cold water to one of the least of My followers, you will surely be rewarded.” {Matthew 10:42, NLT}

Yes, I made the first step. I broke out of my comfort zone and acted in a way that was a little foreign. And I know God was pleased. But I also realize now that I could have done a little more.

This challenge takes us a little further than just talking to a stranger. It’s also acknowledging a stranger by name and letting them know they are deeply and passionately loved by God. He is El Roi after all, the God Who Sees, and people need to know that.

Related: Be inspired to step out of your comfort zone every time you sip from this beautiful teacup that says “You’re braver than you even imagine.” 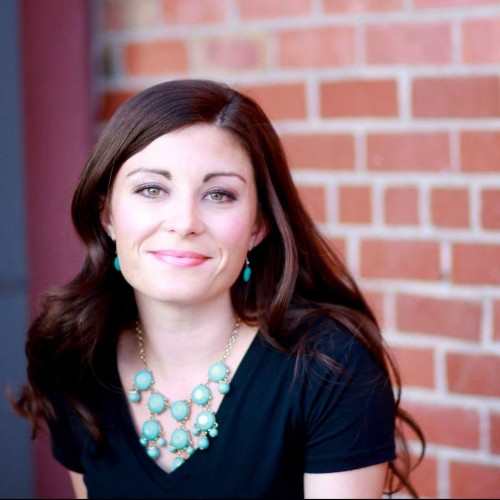 I am a wife, a mama, a little bit of a book nerd, and it is through grace that I’ve been saved. Recently, I’ve felt a call on my heart to share God's love through my writing, and that is what I plan to do. I am not a theologian...