We got out of our jeep, slowly trying to find our legs again after having been crammed for hours in a small space with potholed roads that you are not sure your jeep will find its way out of.

I thought I had prepared my heart for what I would see. After all, I had watched the international news. I had seen the pictures of the villages completely destroyed in the massive earthquake in Nepal.

Pictures on the news translate very differently when your eyes connect with your heart, and you see. You really see. I had to remind myself to breathe when I saw the destruction. When I saw a village reduced completely to rubble.

We ascended a hill and saw a crowd of people. They had heard we were coming.

This was holy ground. I almost felt I needed to take off my shoes as we walked on the holy ground of suffering.

The people were gathered beside the flattened rubble of a building. A building which was their church. A church which now held the bodies of eight church members buried inside.

I sat among them on this holy ground. I saw the deep terror in their eyes when a large aftershock shook the ground we were sitting on. Not only were we among the rubble, the ground was still shaking.

Seasons in our lives can begin to feel like this. In a second everything seems to come crashing down. And sometimes it feels like the ground may never stop shaking.

Ten years before that moment, I had come to Nepal for the first time. God called me to love that country and learn to speak their language. To live there for different seasons. And for this moment, God brought me back to this place. To sit in the rubble.

I opened my mouth and spoke in their language. I spoke simple words of Hope. I reminded them that they had not been forgotten. That God loved them. That we loved them.

Then we prayed. And as we prayed, the hope found on that holy ground came. When you pray in Nepal, everyone prays at the same time. The people who had lost everything truly poured out their hearts before God. It was the most raw and honest prayer time I have ever experienced.

As they poured out their hearts, they begin to lift their hands.

As they lifted their hands, one phrase began to be repeated over and over. Dhanibhad Jesus, thank you Jesus.

As they prayed, they somehow found hope in the rubble.

With tears streaming down my face, I found hope too. Not answers as to why, but hope in Who is the unshakable foundation.

Then, out of the corner of my eye, I noticed one piece among the rubble.

It was the cross that had stood on the top of the church.

It was still found there, among the rubble.

Related: Remind a friend that her story matters. Her words matter. Give her a place to write her notes, lists, and memories with this set of two beautiful journals. 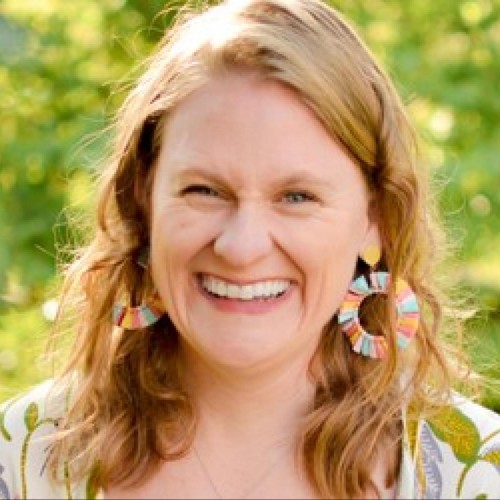 Jenn Hand is a strong-coffee-drinking lover of Jesus. She has a zest for life and loves to go on adventure with Jesus around the world -- often getting lost somewhere along the way! Jenn has been professionally speaking since 2004 and became the Executive Director and founder of Coming Alive...