This past summer I had the rare treat of going water-skiing. And by rare, I mean that it’s been over 15 years since I last stood up on skis.

As I bobbed in the water before the boat took off, I called out to my husband, “If I actually manage to stand up, you better get this on video, because it might be the last time!”

By some miracle, as the motor revved and the boat sped up, the tautness of the rope lifted me right up and out of the water until I was skimming across the top, knees slightly bent, elbows fully extended.

To say it was exhilarating would be a gross understatement.

The sheer rush of bouncing over the wake was enough to plaster a permanent grin across my giddy face. Nevermind the fact that the boat was going so fast, I wouldn’t have been able to close my lips if I’d tried . . .

All of my energy was spent gripping the handle on the rope and keeping my legs as steady as humanly possible. I had little concentration left to think about anything else, besides what it would take to remain in an upright position.

Then all of a sudden, I looked up long enough to see the sun break through the gray layer of clouds. Bright rays shone all the way down until the water sparkled in brilliant radiance.

And I know it sounds strange, but in that moment, I had an overwhelming sense of the Lord’s favor.

It was as if that stream of light from heaven was God showing me His goodness.

And even as the boat rushed forward and muscles I never knew I had were pulled tight in an effort to stay standing, I had a flashback to three summers ago.

The darkest summer I’ve ever known.

The summer my mom stopped chemo treatments, moved into Hospice, and said a final goodbye to my family before we moved back to Africa.

The sun shone that summer, too. When it did, I felt like it was mocking me – taunting me with its brightness. Rubbing in the fact that life goes on even when it doesn’t.

I was too consumed by the dark hole of grief to appreciate the warmth of the light.

I even resented the light for not being swallowed up by the same sorrow that had sucked me down into the depths of despair.

And now three years have passed, and while the sting of that season is just as raw, I’m starting to remember to look up.

To notice the light and to be grateful for it.

To see it as a sign of the Lord’s favor.

To realize that He’s the One that has pulled me up and out of the murky lake of anguish and placed me on a sparkling surface of grace.

Sometimes I can be so focused on keeping my head above water that I forget to look up. I fail to see His goodness when my sight is trained on the choppiness of the water.

The rays of sunshine reflecting on the lake that day were a reminder to me. A reminder that even on days when the clouds threaten storms and thunder rumbles overhead, the light is still there. I just don’t see it. And while it might not come right away, the sun will break through and rays of favor will shine down – in rough waters and smooth. 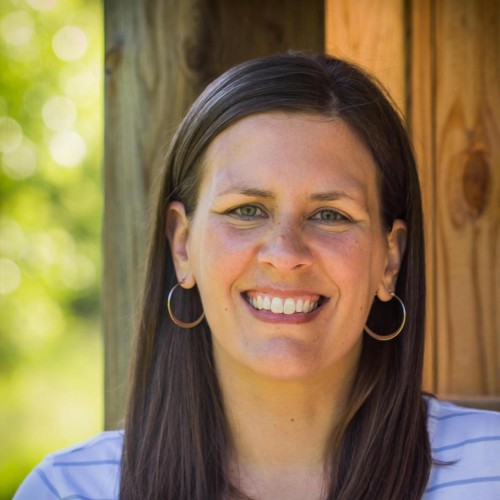 Kate Motaung grew up on the shores of Lake Michigan before spending ten years in Cape Town, South Africa. She is married to a South African and together they have three children. Kate is the author of the e-book, Letters to Grief, hosts the Five Minute Friday blog link-up, and...