Crocodile tears, these were not.

These were leaky eyes. Panicked eyes. The visit to the dentist for this little one had not gone as planned.

It first involved x-rays that mama bear had to put an end to. Then the scraping. And the electric tooth brushing. It tickled, in that uncomfortable way. I felt his pain as I held his sweaty, stressed-out, clenched hands in mine.

All this and finally clean teeth.

But there was hope in the goodie bag. The prize: a gold token. In the hand of this babe, he looked like a gaming man who loves reading Betting News upon seeing the Vegas strip for the very first time.

The prize machine held so many choices. He popped in the token and out dropped a necklace.

I learned later that he had chosen the necklace on purpose. He’d seen a boy at some time, somewhere, who had one. It was as if wearing a necklace was my son’s newest and most passionate aspiration.

It was a tiny, delicate, beautiful cross.

He gasped. It was magnificent.

We made our way to the car, having affixed the new precious possession around his neck. He began babbling immediately, which was no surprise, but his words turned spiritual before the door slid closed.

“You know what I love most in the world, Mom?” he asked. One could only guess with that child, as this topic has ranged from diving boards to honey mustard to Mom to his kazoo.

No, baby, what do you love most?

“God, Jesus, the Holy Spirit. And this necklace.”

I laughed. So sweet, that one. Leave it to a freshly cried-out four-year-old to turn a traumatic visit to the dentist into a holy love-fest. How he could so quickly forget was beyond me.

As I drove home, I shook my head thinking back to a time not too many years back when the oldest one was deathly afraid of the water. I found the best swim instructor with the best references. And that boy cried the entire lesson, screaming “I’m drowning!” while his mama hid in the bushes, silently crying herself.

As soon as the excruciating 20 minutes were over I met him at the pool’s edge. He smiled at me. “Well, that was fun,” he said. “Seriously?” I wanted to yell. “What lesson were you at? I just had a heart attack listening to this one right here!”

But these responses–such simple, turn-of-the-heart responses–revealed something deep. Something was hard. Then it was beautiful.

I’ve cried and fussed my way through plenty. There was a recent season of my life when we were waiting on a test result for the middle one and I thought I would all but explode in the waiting. But I wandered and worried and wondered until all of a sudden it was over. It was hard. And then it wasn’t. But did I ever stop and think something like, “That was ridiculously difficult but gosh, this is a pretty necklace”?

I struggle. We struggle. In the water, in the chair. With our writing. In relationships. With our Father.

But then we don’t.

And we have something beautiful to show for it–whether it’s a thing, a confidence or just the flat-out assurance that there is, in fact, another side in all this and we can make it.

There could be something to these teary, panicked-eyed souls who can suffer, then take a token and turn it into a gift. 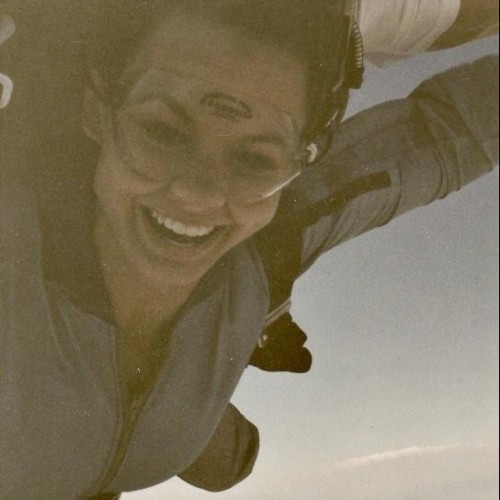 Katie Kenny Phillips lives in Atlanta with her husband, Jeff, and their three hilarious boys (Bigs, Middles and Littles). They are also loving two children through foster care.