Having been raised by the hot-glue-gun-queen who saw something salvageable in every collectible she owned, I had taken a different route than my mother.  If stuff was damaged, I tossed it.  “Life’s too short to deal with broken junk” became my motto, so when I was challenged at a women’s retreat to break a piece of pottery… and then glue it back together… on purpose, I began to question just what kind of nutcases were running the show!

I was told it would be therapeutic.  The process of breaking a piece of clay would aid in “healing deep hurts and buried grief”.  Personally, I thought it was crazy.  Breaking a perfectly good piece of pottery didn’t jive with my too-practical personality – but I went along with it.
Placing my pitcher in a plastic sack, I raised it up in the air, cringed, and slammed it against the ground.  The clanking sound of broken pottery left a heaviness in my heart that surprised me. I began to realize that maybe those “nutcases” were onto something!

Piece by piece I saw parallels of life in that broken pottery.   We start out with pristine perfection -a life of value and beauty.  Time goes by and if life’s experiences don’t slowly chip away at us; it’s the crushing blows against the pavement that finally does us in.

My heart ached for the girl I once was – the perfect, carefree life without its flaws and imperfections.   To me, the past was where my value was. Situations and circumstances had changed who I was, and I couldn’t say that I particularly loved the scars my heart now held.

I turned the broken shards carefully in my hands, careful not to cut myself.  Some pieces made no sense to me, and to be honest, I didn’t know where to begin with putting the pitcher back together.   But slowly and methodically, I became familiar with each piece and with great care began to restore the pot back to its original shape.

Tears formed in my eyes when I realized that God Himself knows each intimate part of my life – enough to be able to rebuild it again. By the time I had finished recreating the broken pitcher, I had come to love it more than ever. The slices on my fingers stood to prove that my own rough edges had certainly hurt my Jesus, still He hadn’t given up on me.

One area bothered me though.  Towards the bottom of the pitcher was a hole.  The pieces that belonged there had been crushed beyond repair.  As I debated over how to repair it, God spoke to my heart, “It is here My light can shine through the brightest.”

Suddenly the jagged, ugly hole didn’t look so horrid anymore, nor did the imperfections on my own heart!  In that moment it became clearer than ever before -true beauty shines brighter through brokenness!

The pitcher now holds a place of honor on my dining room table.  Each time I look at it, it reminds me of the value I hold in Jesus’ eyes, and it challenges me to let His light shine through my life.

The thirty pieces of silver used to betray Jesus eventually bought “the potter’s field”.  The Potter’s field was a place to discard the damaged, broken and rejected pots.  What appeared to hold little value to many gives hope today to those whose lives are reflect those pots.  Jesus purchased the potter’s field with His life and like my mother with her hot glue gun, He sees worth in our brokenness. 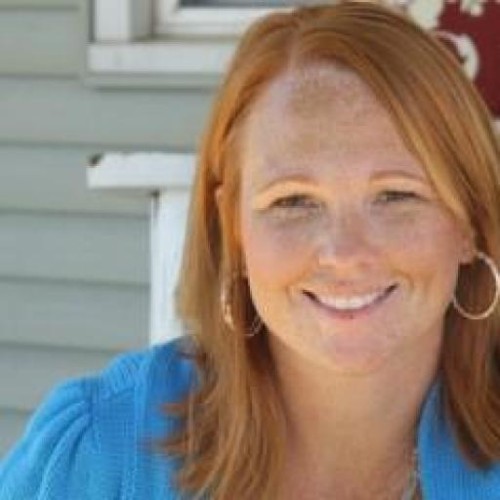 I am blessed to share this wonderful life with my husband, Tim, and our four children, Tyler-11, Amy-7, Corey-5 and Kobe-4. On a daily basis you can find us somewhere on the family farm, at a baseball game, running to piano lessons, celebrating God's love with our church family or...