When I mentioned to my husband and local friends in 2009 that I had joined Bloom, an online book club, there were blank stares and polite nods.  You know the kind. *cue crickets chirping*

Frankly, I would have had the same reaction had I not been captivated by Angie and Jessica’s irresistible enthusiasm.  Little did I know the plans God had to use the book club far beyond the confines of the books we’d read…

Put women in a room together, virtual or otherwise, and the bond that is created through the many common threads of life will give birth to the sweetest of friendships.

Add to that the conversations amongst “Late Bloomers” night crew that always turned to shoes, food, and Jen’s Australian vernacular —what’s not to love?

It was through Bloom that I met my best friend Tia back in 2009. Even though we were nearly 2000 miles apart in two different countries, we had a lot in common including our love for God and the sponsorship of several children from Africa.

When Ato Sam, one of our Compassion children in Ghana, learned that Tia had served in Africa, he confidently told us we should (and would) serve in Ghana next. “I asked God for us to meet face to face…  God says this too shall come to pass… Amen!!”  Had he taken classes from Angie and Jessica?

Drawn to his prayer, we researched serving opportunities in Ghana together and learned that Ghanaian children as young as 4 were being sold into slavery.

Faced with life threatening poverty, mothers are tricked into selling their children to cunning slave masters, believing they are giving their children a chance to survive.  Forced to sell one of your children, which would you choose?

Trafficked into the fishing industry, these children face some of the most dangerous child slavery conditions in the world.  Barely school aged, they’re forced to work 14+ hours a day without basic necessities, facing dangers such as beatings, drowning, electric eels and crocodiles.

Although you’ll mostly find boys as child slaves on Lake Volta, the girls are not spared.  First bought as domestic servants, many are pregnant before they reach their teens, most ending up as sex slaves.

Having grown up in an environment similar to sex slavery for 18 years, I immediately knew that God had shaped my heart for this calling.

Would it hurt, would it take much sacrifice, would it be daunting?   Yes, acts of faith always stretch us uncomfortably, but what good were the books we read if they didn’t stretch us to  impact the world around us?

Had those books not affirmed that we were created to serve God by serving others?

When we announced that we’d be going to Ghana in November to help negotiate the release of these children and to build a school for them, Debra, another original Bloom night owl, contacted us and said “I just have this crazy feeling that I’m supposed to be coming with y’all…”

And so two Bloomers turned into three.   Can God turn three turn into thirty thousand?

$30,000: the cost of building the school needed for the rescued child slaves.  The cost of not building it would be unthinkable.

We’re the body of Christ and when we join as one, He can build this school through us. We are not looking for someone with $30,000 – we are looking for many to give a little.

God multiplies the loaves and the fish given in His name.

Bloom?  Build a school?  Raising $30,000??!  Those who initially raised an eyebrow about the book club are now watching to see what God will do next through Bloom, the not-so-ordinary book club.

Will you join us and watch the seeds He planted bloom for these precious children?  Will you Bloom with us?

By JD, Compassion Can 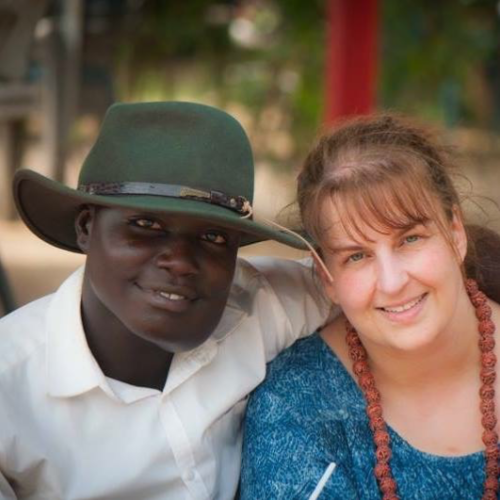 JD is a flawed wife, mother, and Christian who doesn’t believe in following Christ, but rather in pursuing Him with a fearless & unquenchable spirit.