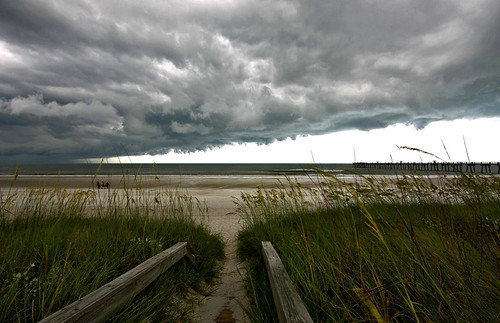 The windshield wipers didn’t do any good.

It was as if they tried to sweep away water that was too heavy to move. This California girl wasn’t used to a spring Florida thunderstorm.

I’d traveled with my best friend to a family wedding in Daytona Beach a few years ago and after a morning spent exploring the coast, black clouds and a few lightening flashes signaled us to head back to where we were staying.

My cousin called us to see if we were okay. He was nearby and agreed to meet us at a local convenience store before he headed home to get ready for the rehearsal dinner.
Customers stood by the cash register and watched satellite photos in reds and greens flash their warnings above the head of the owner.

We looked at each other. We’d been born and raised in southern California. Give us an earthquake, a fire or a mudslide and we can function just fine. But ask us to be brave in a tornado-riddled tropical storm and we turned to puddles of rain water.

A soggy pre-wedding groom found us waiting by the chili dogs and fountain drinks.

“Are you ready? You can follow me back to the house.” My cousin told us.

I didn’t want to go back out into the storm. “Maybe we should wait right here?” I suggested.

He had been raised water skiing with gators here in eastern Florida and I guessed he’d seen his share of storms and hurricanes.

“Trust me.” He said. He opened the door for us and we followed him back out into the southern steam.

The taillights on my cousin’s truck faded further and further in front of our rental car. It was only 2 o’clock in the afternoon but the sky darkened quicker than I’d ever seen it. I tried to keep up but the water and the wipers and the hail were almost too much.

“Turn on the radio, Vanessa. “ I asked my best friend.

She fumbled with the radio and tried to find a station that would tell us what was happening.

All I could hear was the word tornado over the bang of the hail on the cloth roof of the convertible. Visions of that terrifying movie with Bill Paxton and Helen Hunt blew through me. Would we be swept away with the wind and the water?

Tomorrow’s headlines: TWO GIRLS WHO DIDN”T KNOW HOW TO DRIVE IN A STORM DIE BY THE SIDE OF THE ROAD WHEN A TELEPHONE POLE IMPALES THEM THROUGH THE WINDSHIELD. Or something like that.

My only option was to trust the judgment of my cousin who’d lived in storms worse than this and who had experienced the end of a fearful time and knew that eventually, quickly maybe, the storm would end.

The clouds would pull back. The sun would wake up and the sky would stretch blue and clear across the wide Atlantic. He’d seen that before. He was not scared.

But I was. I started to cry and my hands shook on the steering wheel.

All I could hear was the hail. All I could see was the black sky and feel the oppressive uncertainty of being drowned and battered by the storm.

I didn’t know how beautiful the end could be because I’d never been there before. So I had to trust the One who had both created the storm and created it’s end.

The next afternoon we sat barefoot in summer dresses on white chairs on that super fine Florida sand. We watched the sky open half grey and half brilliant sunset as my cousin promised to love and cherish his wife.

Have you ever been blinded by the storm? Are you able to see the clear skies even when you are in the middle of the rain and the hail?

By Sarah Markley, The Best Days of My Life