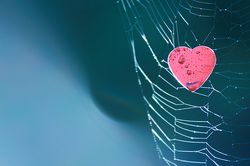 I didn't notice the intricate web or its creator until I had driven a few blocks from my house. After spotting the spider grasping the home it wove on my side view mirror, I pushed down slightly harder on the accelerator with the intent of blowing away the insect and its sticky silk.

Upon stopping at a red light, I glanced over at the web expecting the spider to be long gone. But it wasn't. Some of the web had disappeared, but the eight-legged anthropod remained. I sighed and thought for sure that he'd be a goner once I reached the highway.

At the next red light I stole another peek. The spider remained. And he was there at the following light as well, somewhat frantic and urgent in his weaving, but he held on.

It was at that third light that my attitude toward the creepy bug changed. I began rooting for the spider and wishing that he would make it until I pulled into the grocery store parking lot, so that I could help him. (If you know me and know how I feel about bugs, you would consider that precious statement shocking) I wanted the spider to hold firm. I wanted him to survive, and I wanted to see him place his spindly legs on safer ground.

I wanted that for him because I had been there…to that place of barely hanging on. I am not there now, but the memories are not dull either. Circumstances of life have at times left me feeling as though there were just a few fragile strings standing between me and emotional and spiritual desolation.

But not about to give up.

I have been there.

When I parked my car, I found a stick that enabled me to transfer the spider to the bark of a tree. And for probably the last time in my life, I related to a spider.

Because, I have been there too…at that place of second chances.

Resting in the nook of peace.

Dancing in the light of restoration.

Delighting in the rescue.

"Therefore, brothers, since we have confidence to enter the Most Holy Place by the blood of Jesus, by a new and living way opened for us through the curtain, that is, his body, and since we have a great priest over the house of God, let us draw near to God with a sincere heart in full assurance of faith, having our hearts sprinkled to cleanse us from a guilty conscience and having our bodies washed with pure water. Let us hold unswervingly to the hope we profess, for he who promised is faithful. And let us consider how we may spur one another on toward love and good deeds."