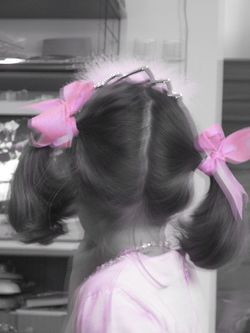 One of my first memories is of me watching Saturday morning cartoons while my mom was sleeping.

It was ridiculously early in the morning, but TV's were simple to turn on back then when you were three. As I sat absorbing whatever it was that had my attention at that moment, my dad walked in the door after a night of driving.

I flung myself in his arms, yelling as loudly as I could "Daddy!!"

Not too long after that, my parents divorced.

Knowing the details of why they ended their marriage doesn't make their decision any easier on me. It doesn't erase the fact that my biological father all but disappeared from my life shortly after that, leaving me longing for another father figure to run to.

When my parents divorced, my mom was given custody of me. I'm not sure if my dad figured that would be enough for me, or if, when she remarried a year later, that my step-father would be a replacement for him. I just don't know. All I know is beyond the obligatory birthday and Christmas card, as well as the occasional visit which became fewer as I grew older, my biological dad has been absent for the better part of my life.

My step-dad in my mind is my Dad. He was there for me the moment he walked in our door and delivered a pizza for supper. I firmly believe, that while my dad is not a believer, God hand-picked him to be my Daddy.

As any earthly father should, my Dad protected me. He provided for me. He showered me with love and handed out discipline when I needed it. He's not perfect, let me just clarify that! But he is my Daddy, and I am and always will be his girl.

My relationship with my Dad kept me grounded, from making poor choices in the dating realm. I didn't feel a need to look for love and acceptance elsewhere, because my Dad was so good at giving it to me freely at home. My Dad was everything a little girl (and not-so-little teen) should have.

At 17, I moved to live with my biological dad. At first, it seemed like a good idea. Things were bad at home with my Mom, my step-dad was on the road a lot, and I needed a safe place to be. But very quickly my biological dad checked out of our relationship. I lived in his home, but I did not live with him.  I began making choices that reflected that sense of abandonment I felt living with someone whose idea of parenting was telling me "If you can't be good, be careful. And I don't want to know about it."

Until I moved, I had only dated a couple of boys. I set firm boundaries and stuck to them like glue. I did not compromise or felt like I should, even when pressured. But afterward was a different story. I dated to feel loved and valued. If I didn't have a boyfriend, I felt worthless. While most of my boyfriends were from the youth group I attended, not all were who my Heavenly Father would have approved for me. I compromised myself and my values, all in the name of trying to find that love I had lost when I moved away.

By the time I met my husband at the age of 21, I felt cheap and worthless. When I first met him, I was taken by him immediately. I knew he was the one God had chosen for me! But after a couple of weeks of dating, I began to experience a sinking feeling as I realized that I might not be good enough for him.

When I shared parts of my past with him, I held my breath, waiting for him to hightail it out of there. Instead, he reminded me that my past was just that. My past. And that even though I would live with some of those consequences for the rest of my life, I was forgiven. And if God in His love could forgive me, than who was he to hold it against me?

You may have a past you are not particularly proud of. You may try to hide from it in hopes it will just disappear.

God knows your past. And if you are willing, He is willing to forgive you. In fact, He already has, through the blood of His beloved Son, Jesus. He is here right now, offering to you His free gift of forgiveness. No strings attached. All you have to do is take it.