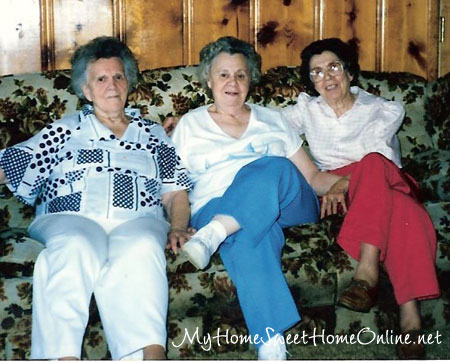 A new year brings resolutions, and mine include the desire to be a better parent. While much has been gleaned from personal experience and reading—especially the ultimate parenting manual, the Bible—many of the most valuable lessons I’ve learned came from my childless great aunts.

And, really, these lessons aren’t just for parenting…they help bring a little more love to all relationships.

My maternal grandmother was the youngest of eight children, three boys and five girls. She must have been a bit of a rebel, the first girl to marry. I remember my great-grandmother as a stern woman who managed to get three daughters to never leave the nest; they were my aunts Thelma, Lessie, and Mayme.

Although never marrying and starting families of their own, my aunts were a powerful presence in the lives of their nieces and nephews. They had hearts for children and I gleaned valuable lessons from their examples…

I can still see the interior of Aunt Lessie’s car, blue seats covered in clear plastic with raised dots, perfect for poking with little fingers. On summer Sunday afternoons she took my sister, cousin, and I to the kiddie pool at the local public park.

Surely a sixty-something woman had other things to do—lazy afternoon naps come to mind—but she toted us to the pool week after week, thereby giving our parents the break. I like to think that she enjoyed those times as much as we did.

Aunt Mayme possessed an uncanny ability to empathize with children. Behavior that I find frustrating and annoying was explained with fresh light by this little woman who could see through a child’s eyes.

I am guilty of expecting my children to reason with adult logic, but Aunt Mayme could effortlessly recall the mindset of youth.

Aunt Thelma turned sixty the month before I was born. She had bad knees and no driver’s license, but possessed the patience of a saint. Nieces and nephews sent their children for her to potty train. Endless hours were devoted to playing tic-tac-toe and dominoes with my cousin, sister, and I, sharing her personal tips and strategies.

Aunt Thelma was even less mobile by the time I had children of my own, but they, too, were drawn to her side. My boys shared her love of baseball and the Braves. She sat on the couch and pitched to my sons, who ran bases around the living room. Later, they would curl up on the couch and watch the game with this great-great aunt who knew all the stats and harbored a dislike for Barry Bonds.

I learned from her that kids don’t need expensive toys and trips, they just need your time.

Although my younger children will never really know their great-great aunts, my older ones remember. I’m thankful for the wisdom and godly example of these women, and the lessons that I can apply in the raising of my own children and in every other relationship too.

What’s one of your favorite life lessons?