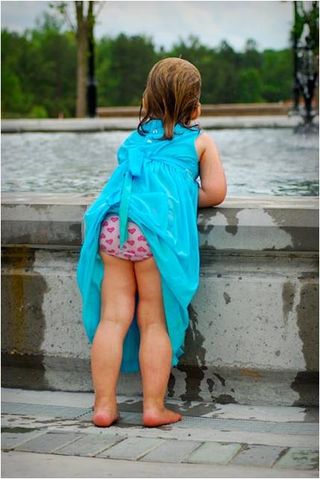 Photo by Dawn at My Home Sweet Home

You know, the forty dollars for two weeks of 25 minute group sessions taught by college students at the community pool.  I used to pay for the teach-the-kid-how-to-swim-in-a-week luxury lessons back when I thought I was rich and I pampered my first child like the princess she was.

But now, we all settle for the cheap ones.

Maybe you think this is cruel:  dropping a sniffling, goose-pimpled, three-foot-high child of the edge of a bouncing board into the dark blue water of the deep end.  But I don’t think it is.  I think it’s necessary.

My seven-year-old, in all of her risk taking glory, nearly runs to the end and catapults herself into the brilliant turquoise of the pool.  She swims to the edge, climbs out and begs to go again.

My three-year-old, however, doesn’t have the same type of reckless personality that her sister has.  She isn’t timid, but recognizes her personal limits far more than her sister did at the same age.  When it comes to her turn, she’s been standing in the shade for 5 minutes and has already begun to shiver.  Aided by an instructor, she walks to the end of the board confidently before she realizes what it is she’s about to do.

Her smile quickly morphs into terror and she begins to scream.  She tries to claw her way back to the diving board ladder to dry ground but the instructor won’t let her.

Her trusted, smiling teacher is treading water for her directly under the edge of the diving board but she still won’t jump.  He calls her name, begs her to jump, but now her screams are reaching eardrum-piercing levels.

The instructor standing with her on the board gently picks her up under her arms and drops her arched, squealing body the all of 24 inches into the waiting hands of her teacher calmly treading water in the pool.  A brief second and she emerges from the surface of the water, still looking horrified.

Until everyone claps and cheers for her bravery.  And she grins.

He swims her to the side of the pool, I wrap her in a towel and tell her how proud I am of her.  That she’s done well.  That she’s so brave.

But she really isn’t brave. She’s been forcibly dropped in the pool and then swum by a capable adult to the side. She really didn’t do anything.

Because courage might not be about bravery or doing something worthy of valor.  Courage, sometimes, might just be being present.   She didn’t ask to go off the diving board and certainly didn’t ask to be dropped in with arched back and screaming mouth.  But she was there.  And with assistance, she accomplished the goal.

My own courage, in its mini surges and meager portions, has usually come from just being there.  It’s courage for the moment and not a bit more than that.

Allowing God to restore my marriage 6 years ago took courage.  But mostly it was just making the appointment, sitting on the couch and asking God and our marriage counselor, “What do I do next?”

Sending my oldest from the safety of my mini-van into the world of school takes that same kind of passive, being-there courage.  Trusting her little heart with all the whims of the other girls in second grade requires a Mama-courage that I never knew I had.  I just have to open the side door and let her go.

Courage is waking up in the morning and resolving to try to clean my house and not yell at my girls when they destroy their made beds and organized bookshelves.

Lacing up my running shoes and taking the first step out of the door to jog when I’m exhausted and really don’t feel like it is courageous in its own way.  Ninety percent of the jog is just showing up.

Courage is sometimes just walking right up to a new situation and simply being there.  Courage just might be walking to the end of the diving board and allowing someone else to drop me into the deep end.

Because I know Someone’s treading water below me and He never gets tired.  He won’t let me drown.