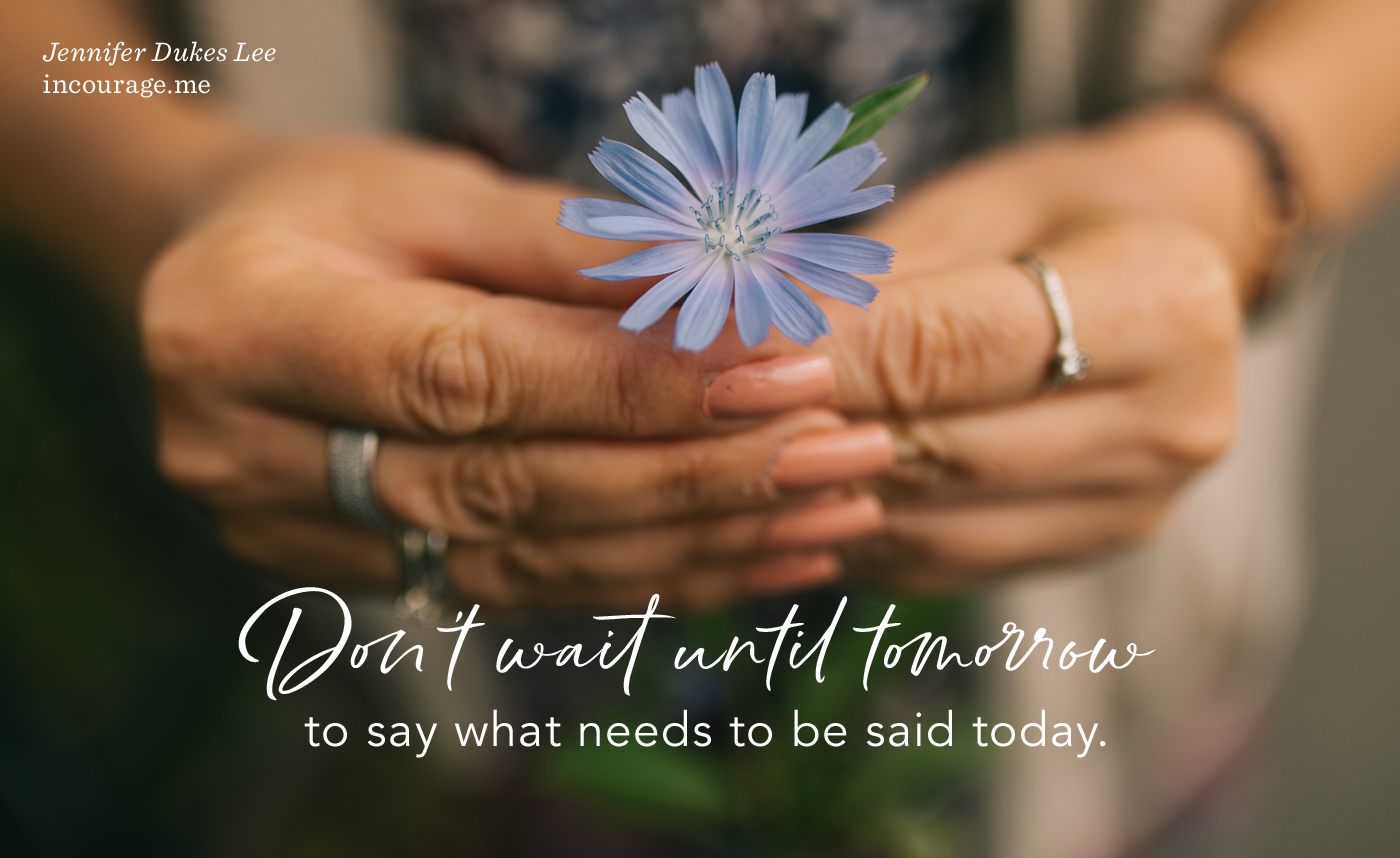 Recently, our little country church did what we do best. We rallied around our grieving brothers and sisters. The visitation and funeral were held under our steeple, and it was our great privilege to set up chairs, bring food, wash dishes, play music, offer hugs, clear tables, set out Kleenex boxes, and pray.

We have a lot of elderly folks in our congregation, so we know what it takes to walk alongside families during these trying times.

But this goodbye was different in so many ways. Why? Because no one expected that we’d have to say goodbye to Charlie as soon as we did. Everyone in the room figured they’d have many more years of Charlie’s jokes, his entrepreneurial ideas, his wit, and more.

The fact that our time here on earth is limited often catches me by surprise like that. You end up thinking there’s more time, and you turn around to discover . . . there isn’t.

Death inevitably snaps us back to the reality of life’s brevity. Death asks you to take the time, right now, to say what you need to say, to forgive whom you need to forgive, to take a step toward that unrealized dream.

The day of the funeral, I strolled around the sanctuary and lingered over the memorabilia that the family had set out. All of it was a meaningful way to remember a father, a husband, a son. There were framed photos, newspaper articles, sentimental artifacts. But the thing that stopped me the most were all the words this man left behind. There were journals, letters to loved ones, poems scratched with blue ink onto yellowing paper. Through his words, we were granted permission to peer into the tender, hilarious, sentimental, poetic, extraordinary heart of a man named Charlie.

I ran my hand over his words, immortalized, and I kept thinking, Here’s a human being who remarkably didn’t seem to leave anything left unsaid. If someone needed love, he gave it. If he needed forgiveness, he asked for it. If he thought your heart longed for a poem, he wrote it. What a gift.

I was moved to tears by all these words.

Standing there, his words pried something loose in me. Whether he intended this, I do not know, but Charlie seemed to ask us,  What needs to be said?

In that moment, I knew this for sure: I don’t want to get to the end of my life and regret having never said what needed saying. I want to be like Charlie. I want to say what needs to be said now. I want to love with wild abandon now.

Hospice chaplain Kerry Egan says a lot of people talk to her about the last words they might say when they die. She wonders if people have too many Hollywood, romanticized versions about what the end of a life will look like. Unfortunately, it doesn’t work like that. For some, death — which might have seemed like a faraway rumor when you’re young — shows up like a surprise. And even if you know it’s coming, you might be unable to express your thoughts in the way you’d always hoped.

“If you had something so important to tell your loved ones that you feel the need to plan out what to say, then why would you wait to say it?” Egan asks.

Let’s not wait. What words do you need to say? Find the strength to say them today.

Let someone know you love them now.

Stand up for what you believe in now.

I feel like it’s a bold challenge from Charlie, who modeled love in a profoundly beautiful way. Take the challenge: Don’t wait until tomorrow to say what needs to be said today.

Maybe you’ve tried in the past, but the words wouldn’t quite come. Maybe you’ve swallowed the words down because you were afraid of what they’d say — or what they might not say — in return.

In theory, I’ve always known the truth of saying what needs to be said. But in the life of one man, I saw what it meant. I read his heart on his pages. I also read his heart imprinted on the hundreds of tear-streamed faces who walked through our church’s doors, in a standing-room-only sanctuary of a country church in Iowa.

And at last, I saw his heart again when his twenty-four-year-old daughter held the microphone at the front of our church. She didn’t know if she could get through her remarks, but she said she’d regret it for the rest of her life if she didn’t try.

Yes, she is her father’s daughter.

She found the courage within herself to find her voice for those of us gathered before her. She told us what she needed to say, and in that moment, we all heard what her father already knew — how fiercely she loved him. She had already said what needed to be said to her dad, but now it was our turn to hear it. And there was no holding back.

It was brave, and it was right.

And it was beautiful.