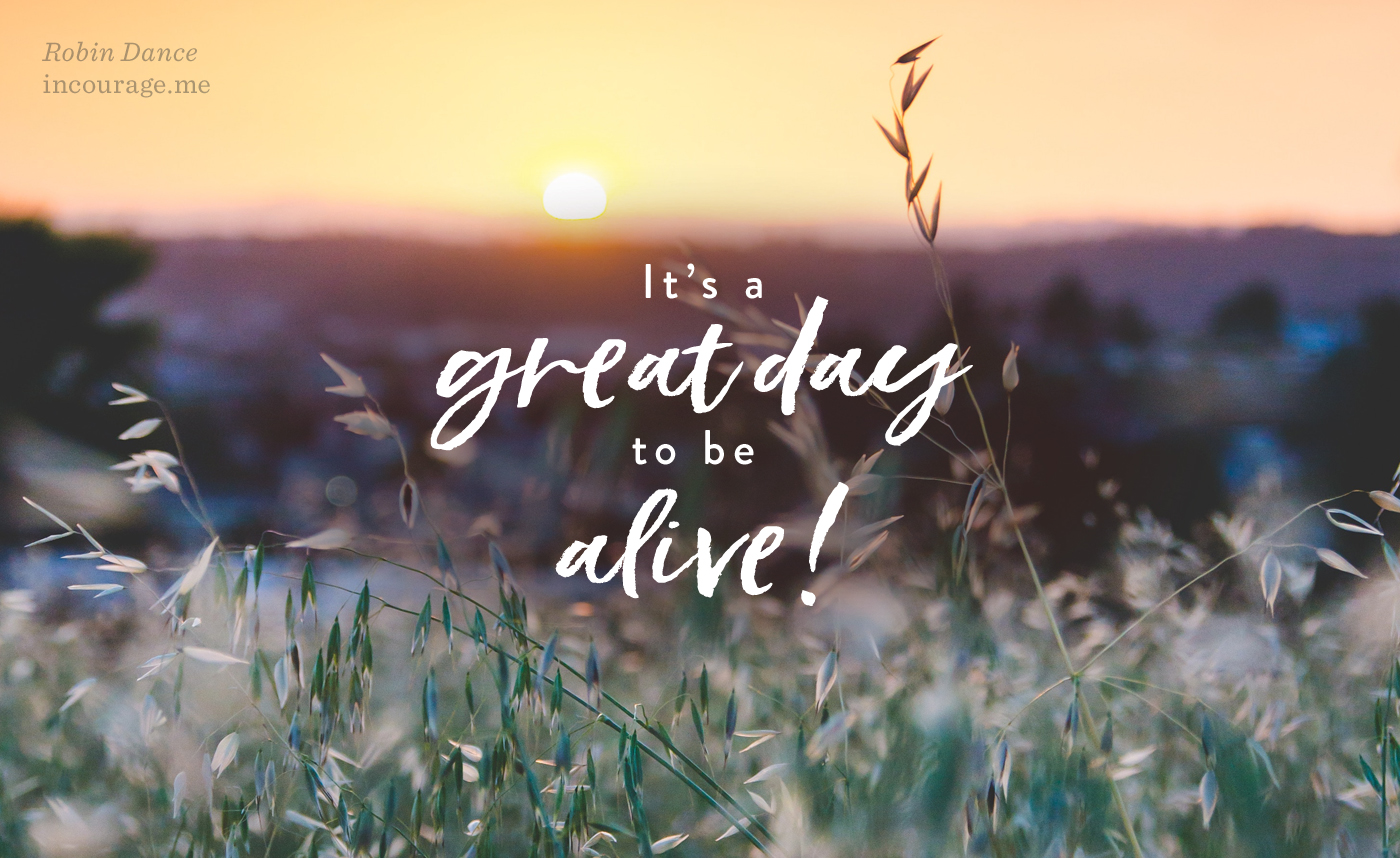 Be honest. Are you tempted not to read this because the title is just a little too perky or trite or cliché? I get it. Sometimes I’m not having any of it either. But I’ve sensed the Lord nudging me to sling a little joy your way, and maybe this one is for you after all.

I’m a collector of mottos. Little sayings or mantras or life philosophies that are tall with wisdom but short on words are often the very thing that most perfectly communicates the heart of a matter soundly and succinctly. A few right off the top of my head:

Better to have it and not need it than to need it and not have it. (My children know this Robin Dance-ism all too well.)

Seek to understand before needing to be understood. (my version of Dr. Covey’s Habit 5)

Parent hard and on purpose and with the end goal in mind. (Another one of mine)

Leave it better than you found it.

Something is better than nothing.

God gave you two ears and one mouth so listen twice as much as you speak.

Don’t believe anything you read or hear and only half of what you see. (Granddaddy Jake, Scripture notwithstanding)

An ounce of prevention is worth a pound of cure. (Benjamin Franklin)

Age is the price you pay for life, and it’s not a privilege everyone gets to have. (Mama’s Way)

I have Jon Dorenbos and America’s Got Talent to thank for my newest favorite saying. Jon is a former collegiate and professional football player whose athletic career came to an abrupt end with the discovery of an aortic aneurysm during a routine physical, requiring him to have immediate open heart surgery. With football behind him Jon transitioned to magic, a passion he discovered as a child and continued to develop even during his years in the NFL. Jon competed in two seasons of AGT, earning a third place finish in its eleventh season and later becoming a World Champions finalist.

It was in Jon’s most recent performances I found inspiration as he ended his show-stopping magic act with seven powerful words: It’s a great day to be alive! His close brush with death made him particularly thankful for life, something he likely took for granted before his heart surgery but afterwards fully appreciated.

Jon’s seven words reminded me of an even shorter but similar phrase on my unofficial list of life philosophies:

This time inspiration came to me by way of the book Same Kind of Different as Me in an exchange between a homeless man and Deborah Hall, a volunteer serving meals. Mystified but drawn to this man’s countenance despite his meager circumstances, Deborah asked him why he was so happy. “‘I woke up!” he replied, eyes twinkling, “and that’s reason enough to be happy!'”

Wow… something I had taken for granted my entire life – waking up every morning — suddenly took on new meaning.  Though this man had little in terms of material possessions, his value was immeasurable and his impact, far-reaching. In a book with several memorable characters, it is him and his poignant, positive, powerful response that most impacted my life.

Perhaps you’re in one of those seasons of challenge, difficulty, grief, or heartache, and it feels like it will go on forever. Take heart, my friend. Jesus isn’t only personally acquainted with difficulties, grief, and heartache, He’s intimately aware of and cares about your circumstances. In John 16, Jesus encourages His disciples by explaining the work of the Holy Spirit and telling them their sorrows will be turned to joy. He concludes this hope-filled chapter by explaining further,

“I have told you these things so that in me you may have peace.
You will have suffering in this world. Be courageous! I have conquered the world.”
John 16:33 (CSB)

We will have troubles and trials in this world, but we can be courageous despite them because Jesus has conquered this world!

In another familiar passage, James also challenges us to reframe how we view life’s trials — as great joy, or as the Message words it, sheer gift — because tested faith produces endurance, steadfastness, perseverance (James 1:2-3). Our sadness and sorrow are not wasted; holy and and hard work is being accomplished.

I’ve begun a morning ritual that sets the stage for my days, a simple discipline I practice before I even get out of the bed. In the quiet of my mind and heart, I incorporate a few of my life mottos into praise and prayer:

Friends, we woke up, and it’s a great day to be alive! Today, we have opportunity to be Jesus to someone who needs His grace, compassion, truth, and love because sometimes life philosophies are simply walking out your faith in ordinary ways.

How astounding that God can use waiting and rejection to prepare us for His calling! Sometimes the only perspective that enables us to see God’s hand in our lives is hindsight. -@robindance: https://t.co/kidTwBh88O https://t.co/OLry6EQUQz